0
1
There are more vehicles of note in Mitchell & Yancey Counties than there are hound dogs. I do not purport to represent them all here. We all have those places and things on the side of the road that our eyes gravitate toward each time we drive past. Here are a few that keep my attention:
First, the artist/baker’s anti-war/pro-feminist truck. To be technically anti-war, it should probably be a bike, but there wouldn’t have been enough room to paint all the bombs. 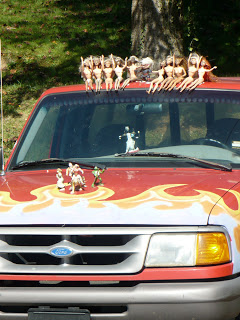 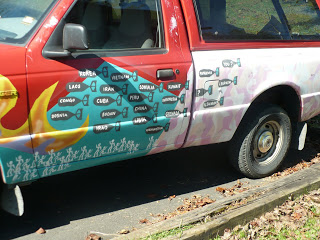 Second, the creepy dude’s hideout bus. Into the Wild, anyone? As meticulous as his wood pile is, the owner won’t be around this winter to enjoy it. He was thrown in jail last month for threatening his lawyer. The threat? “I will kill your dog and eat it in front of your children.” Like I said—creepy. 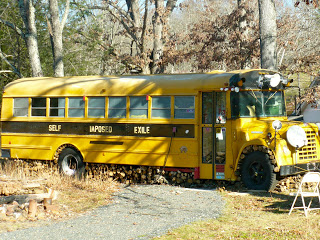 Third, a local gardener’s truck. Did he get stuck in quicksand and the truck saved his life? Was he merely playing games, alone with the bliss of his work in the mid-afternoon sun?

Fourth, a rarity—the Volkswagon Rabbit Pickup Truck. What I find almost as interesting is the fact that this vehicle, along with the others nearby, is parked on top of old 2×4’s. Not a bridge. Just slats of wood laid side-by-side. Beneath the wood? A tributary of Cane Creek. 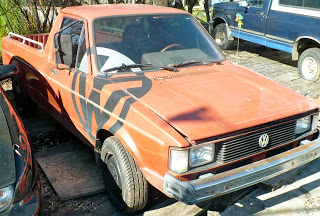 Fifth, this clever variation on the oft-altered TOYOTA logo: 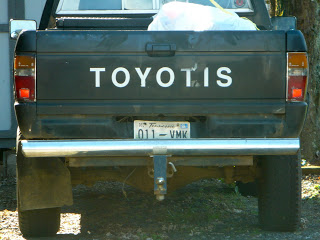 Sixth, my truck. Meet Lady Blue, the $150 Queen of Fork Mountain. Key feature: “Havoc Unleashed,” a barbaric plastic figurine given to me by none other than Dad Schultz. 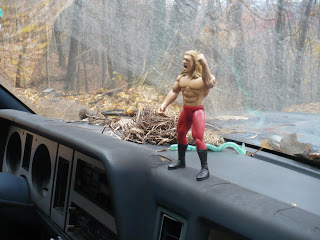