Putting it in Perspective

0
1
There is so much to be thankful for. We say it all the time and we mean it, we really do. As I spent a leisurely four days with my family, safe and sound and stuffed full of this year’s Thanksgiving turkey, I couldn’t help but think of our US troops fighting in Afghanistan and Iraq.
What is thankfulness but a matter of perspective? They’re smiling here, but it doesn’t take much imagination to conjure how they must really be feeling that far from home at a time like this. 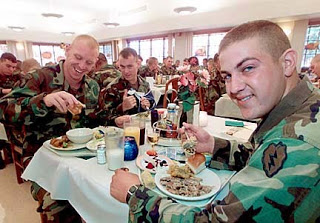 [Troops in Iraq]
These men and women are fighting in our name. It’s an odd yet powerful notion. We elected a man who had the power to send people with weapons into other countries and kill people. I don’t believe I can ever truly call myself a pacifist so long as I am also a citizen of the United States of America. Part of my citizenship means I pledge allegiance to a nation that is currently at war in two countries—a nation that is killing people and allowing its own people to be killed every day. 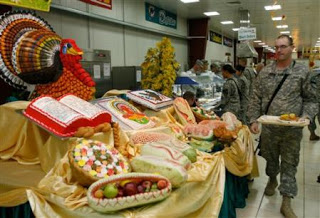 [Troops in Green Zone]
Never mind that I routinely declined to recite the Pledge of Allegiance in public school. Never mind that I’d go to jail before going to war. As a citizen of a nation that uses force and takes the lives of others, I am in some way supporting violence every single day of my life. 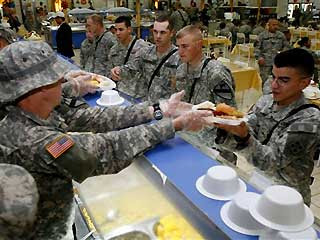 [Thanksgiving 2006…A mid-point of this war that’s nearing a decade? Only if we’re lucky.]
The human predicament is rife with irreconcilable differences. How do we empathize with troops whose violence we don’t endorse? How do we bring them home, clean up our mess, create a safer country for our children, and earn the respect of those we have so greatly harmed? How do we defend ourselves and remain peaceful?
**Facts? Read about troop morale: http://www.timesonline.co.uk/tol/news/world/Afghanistan/article6865359.ece**
Comments