0
2
I could tell you about Brady Udall’s craft lecture on fixed, received, and moving action in stories. Or I could tell you about Pam Houston’s powerhouse discussion of metaphor, memory, trauma, and time. But I’d rather tell you this:
All week long I ignored the tides—their pull and undertow, their tantrum waves and patterned movements. I heard the sea roaring about and with each beat I felt the power of being at the edge of the continent was all too much to bear. This morning, however, I allowed myself a few hours along the shore, its sandswept beachfront like a silky mirage. 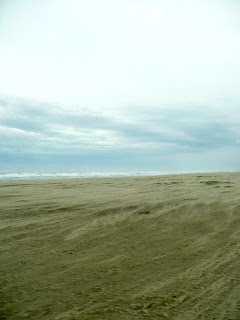 It is no small thing, this notion of looking out over the edge of the world. For centuries a glimpse of this far shore was sought after, fought over, and dreamt of. Excursions were funded, folklore fostered. There is so much power in standing, toes dipped into the Pacific, that I scarcely brave the beach to do it.
This hesitation has both literal and metaphorical significance for me. I feel the conceptual and literal power of the ocean and the line it beats against the jagged continent so profoundly that I fear giving my full attention to it could pull me off course. Clearly, the ocean is a force to be reckoned with in my life and the only way to reckon with it is to live right up against it.
Just as the mountains have shaped my life, my habits, my field of vision, and my sense of place over the years, living on the shore could work a slow, deep magic on my psyche. I’ll start with the Great Lakes, though, ready to welcome the “freshwater seas” of the northern United States into my mind-scape like the characters in a well-written story.
Showing 2 comments