0
1
[Warning: Gross picture at the end.]
Mr. B, a late-twenties-something petite man with skin taut as a drum over two angular cheekbones, leads the class. He is MMA certified and cross-trains in Taekwondo. He has also perfected what is, in my opinion, the world’s most perfect push-up. He’s got us lined up, alternating between sets of 25 jumping jacks and 10 push-ups (shouting “1 Sir…2 Sir…3 Sir” between each). Why am I here? Because a mixed martial arts class is the closest I am going to get to jiu jitsu training, which means grappling, throwing, joint locks, take-downs, and strikes.
After a series of elbow strikes into the pads, we begin partner drills and I am paired with Mrs. B—that’s Master P’s daughter and Mr. B’s wife. From what I can tell, she’s also sempai (first student) or at least sempai for all the women. All of this matters because when you’re a guest in someone else’s dojo, you’re on more than your best behavior. And when you’re working with a sempai or a relative of the head teachers, you can bet you’re also being watched. Master P sat in his office during this class, poised behind a desk that directly faces the training mat.
We work single-leg and double-leg take-downs and the wrap up and entry feel all wrong to me. Then we work a leg trap-spinning back elbow combo that I only partially believe in, but it’s interesting all the same. I have been taught to do some of these movements differently but none of that matters. I’m expected to do it their way in their dojo and so I do my best. The best part is that I’m getting practice with ma, or distance and timing, and that’s not something I can practice when I’m by myself. We breakfall backwards onto a layer of padding so nothing really hurts. Yet.
It’s when Mr. B tells us to start shin-kicking that things take on a different flavor. “There are three speeds in martial arts. What are they?” I can hear Hanshi’s voice in the back of my mind. “Learning speed, training speed, and combat speed, Sir!” we would have answered. But this is not Blue Ridge Martial Arts Academy. It’s MMA night at the ATA school in Traverse City and I’m not sure what I’ve gotten myself into.
“Imagine cutting downward with the blade of your shin,” says Mr. B. He demonstrates on his partner with a light touch. “Aim for about mid-thigh,” he says, “that’s the point you want to hit.”
He’s talking about GB31, or gallbladder 31—a meridian point that’s located on the outside of the thigh just where your middle finger falls naturally if you stand at ease. He doesn’t mention how to find the point, nor does he mention that hitting the same spot over and over is going to matter more than hitting various spots with all the power you have. I only know what he’s trying to get at because Hanshi has taught us about this meridian point since I began training.
Mrs. B and I kick back and forth, light but effective taps on the thighs, trying for consistent aim. Next, we add a block. She kicks, I raise my knee up and point my toes down to break the brunt of her kick with my shin—bone on bone. Shin kick, block;  shin kick, block. We add more to the drill: shin kick, block, fake shin kick to back leg take down (hooking the kicking foot behind the opponent’s knee, then crashing forward to take them down to the mat). Switch sides, work faster, repeat.
In a matter of 15 minutes I go from learning to training to combat speed. It’s only in retrospect that I realize my mistake. With any new move, if you add speed before you have form, you lose control of your power. It hurts to block bone on bone, but my focus isn’t on my feelings, it’s on technique. By the time Mr. B tells us to circle up for sparring, I am totally amped. That’s when I notice everyone else has shin pads, mouth guards, and gloves. In fact, they’ve been wearing them the whole time. Oops.
“Ok, the rules are simple,” says Mr. B. “You have 2 minutes per match, first person to take their opponent down wins. No hands at all. Just shin kicks, foot sweeps, and leg blocks.”
When Mrs. B is called onto the mat and asked to pick her partner, she chooses me. What I’m most proud of is that I stay on my feet the entire time. What I’m not proud of is the fact that I thought I could use this new kick in full contact at combat speed and that, somehow, it wouldn’t hurt like hell. It’s not that Mrs. B and I are hard on each other. There is not an ounce of animosity between us. It’s just that with all the adrenaline pumping through my body and a circle of other practitioners cheering us on, how can I possibly get my brain to tell my body to move slow in order to kick or block lighter? If I moved fast, which I had to do, I lost control of my power and that’s when Mrs. B and I were really banging on each other.
Here’s the result, 48 hours and a tube of arnica later: 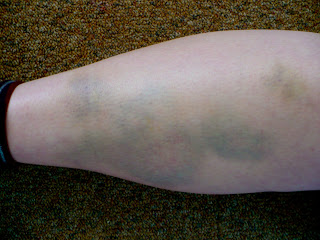