0
0
“I don’t recognize this two-track,” says Leon Hammerhead, my writing guru and personal snowshoe coach. “Which means I don’t know exactly where we are.”
We’re not far from the Boardman River. I know that much. We’ve come across an abandoned oil drilling site, a bow hunter’s tree stand, fresh bobcat tracks, and now this man-made, snow covered snowmobile track that apparently isn’t the one we crossed before.
“We’ve got all afternoon,” I say, and I mean it. Sure, Jerry Denis’ copy of The Living Great Lakes awaits me back at the cabin, but this is Leon Time and there’s nothing like watching the author of ten books at work in the world he considers to be the very twin to his peace of mind.
Leon smiles, then cuts left toward a wetland (frozen, of course), and we snowshoe along at a fairly good clip. Neither one of us is nervous. It’s a balmy 29 degrees and cloudy. No snowfall in today’s forecast and still plenty of hours before dark. Worst-case scenario, we follow our own tracks back. But within 20 minutes we’ve circled around to another ravine and there it is—a clean line of snowshoe tracks from the earlier part of our expedition.
Leon’s teaching me to dig my toes in on the steep climbs and let my mind go on the declines. We’ve ditched our poles and packs and aren’t even wearing coats. Just a few good layers and warm hats. We leave the rest of the work to our bodies, which stay warm enough from all the moving around. Since Leon’s cutting trail, he’s the one who takes the falls when the going gets tough—over nurse logs, under hemlock branches, through birch stands. 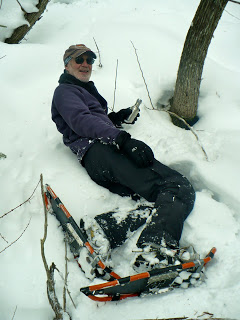