0
0
One of my former professors from grad school used to teach at Interlochen and lives in the area. He is probably one of the most intuitive writers I will ever know, one of the most genuine men I’ll ever meet, and also one of the most humble. For all his shyness, however, he has developed a “public alter ego” who is best known as Leon Hammerhead. Hence forth, when I talk about this author, that is how I will refer to him.
Leon and his friend, who I have called “Mr. White” in this blog and who I teach with here at Interlochen, are two wild and crazy guys out on the sledding course. For evidence, see the following brief You Tube video, just one in a series that chronicles their high adventures:
http://www.youtube.com/watch?v=wMRaZQs8LrI&feature=related
Who said there weren’t hills in lower northwest Michigan? The hills in this video are some of the same hills I snowshoed up, down, and all around on with Leon this afternoon. We talked trees and bobcats, bow hunting and rifle season. We talked poetry and process, workouts and outdoors. And in the end, the clouds parted for a lovely moment of Michigan sunlight. 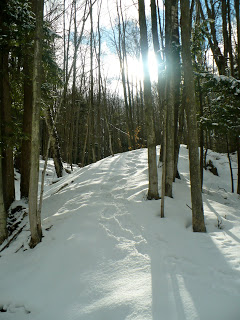 The forecast is calling for 3 days of “sun.” You can bet I’ll be outside as much as possible. Next week? Leon says he’ll take me on my first training run down the sled course on a Hammerhead. Here we go!