Hunting for the Mystery

0
2
Yesterday I hiked the shore of Green Lake as far as I could (without trespassing) in search of the mysterious “singing ice cones.” There is a phenomenon here in the North Country that occurs during spring melt. It can happen as quickly as the course of a conversation—look away for a few minutes and you might miss it—but it also happens in patches all across and along the lakes at varying times. If you miss it in one place you just might catch it in another.
Based on the descriptions of this phenomenon, I set out to see if I could catch it. Some areas of the lake were clearly too far along: 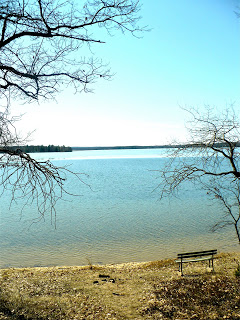 Other places not far enough: 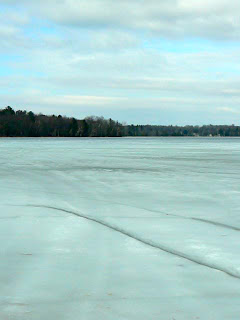 What I needed were the places in between. Places where the ice cones could form and then bob and “sing” alongside one another. Here’s how it works:
As the surface of a lake bends and cracks, melting at various speeds, large plates of ice shift and lift like tectonic plates. Dark water bleeds through the cracks in these plates, attracting and holding more of the sun’s warmth than the white ice. As a result, these darker areas heat up faster and create mini-whirlpools of their own, warming and melting the ice along their periphery. This circular motion leads to a melting process that shapes chunks of the ice plates into conical “ice cones” that swirl and bump against each other, singing in a distinctly soft, cold whisper along the lake shores. They circle and dance their way toward the lake’s outflow or they melt quickly, depending on size and air temperature. Either way, catching a glimpse of them as they “sing” and swirl is a rarity any true Michigander wants to see every year—as they’re the truest sing of spring. 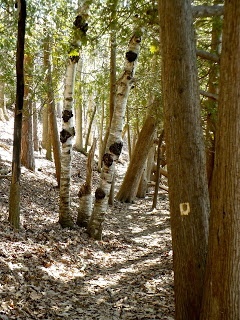 With most of the snow gone, I enjoyed quiet, cool coves of cedar and birch along the lakeshore, but I did not see or hear any signing ice cones. Tomorrow, I’ll search along Duck Lake, though I fear I may have missed my chance. Meantime, I take comfort in the little swimming creatures I saw beneath this small crack in the ice, fearlessly wiggling or breaking the surface of the water in, perhaps, their first brushes with life beyond the lake. 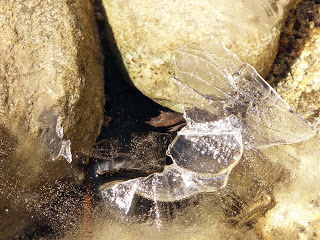