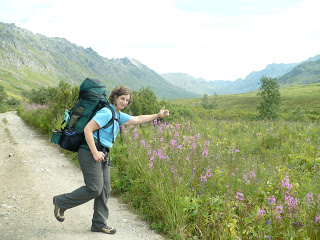 Planning four months in advance of my trip to Alaska might seem a bit, well, eager. But when you consider I have to find a place to store my car and my belongings, purchase a whopping plane ticket from a teensy airport, save money for possible train tickets or Craig’s list car shares, and train for heavy backcountry hiking, well…
[Above photo: AK 2009 backpacking]
In the past week, the following progress has been made:
1. Purchased $574 round trip ticket from Traverse City, MI to Anchorage, AK. All totaled, I’ll have 6 weeks in The Last Frontier.
2. Got the specs on the cabin I’ll be staying at in Fairbanks, AK for 2 weeks in August. This would be with KB, a homegrown Alaskan who is also a freelance writer covering women’s rights issues in Iraq and Afghanistan.
3. Got the specs on the cabin I’ll be staying at in Denali, AK, including possible September dates it is available. This would be partly solo and partly overlapping with another homegrown Alaskan writing friend, whose work—among many other things—champions for the preservation of the tundra. Read more HERE.
4. Cast a line to a third homegrown Alaskan writing friend (and former rugby teammate from undergrad) who will host me in Anchorage…with the possibility of a week-long side trip to her backcountry cabin near Homer, AK. 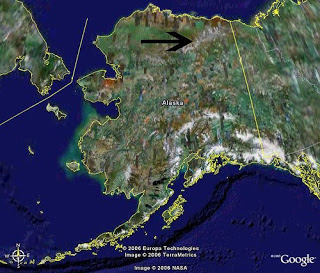 After KB and I write in the cabin in Fairbanks for 2 weeks, we’re thinking about driving a day and a half even farther north and heading into the coveted Brooks Range [see arrow on map above]. This range is above the Arctic Circle, so the sun never sets in the summertime. She has a friend who might (!) be able to fly us in and pick us back up by plane a week or so later. Whether we enter the range by car or plane, either way it will trump all the backpacking I’ve done since I was 9-years-old in terms of difficulty. Mosquitos the size of seagulls. Grizzlies speckled across the valleys. Hummocks like some seventh level of Hell. But…but…the tundra on the cusp of fall colors, the migrating caribou, the endless daylight, and the chance to hike somewhere a very small percentage of humankind will ever see.
Comments