Flags at Half Mast

0
0
Last week I drove to the local VFW (Veteran’s of Foreign Wars) to meet an active-duty NCO in the National Guard. He served in Afghanistan from 2006-2007 and agreed to meet with me to discuss details about the lifestyle, ecosystem, and culture there.
I’ve never been to a VFW but this one was basically a bar, smoke-filled and medal-decorated at every turn. Folks were kind to me, despite the fact that I was clearly “a civilian.” I waited at the bar next to a few men for about ten minutes until my interviewee showed up. We moved to a table slightly out of earshot from most of the other veteran’s and got to work.
The short version is this: the bridge scene I wrote in my first draft of the Afghanistan/17-year-old narrator story isn’t going to cut it. What little disappointment I experienced hearing this was quickly mitigated by the Sergeant’s stories of his experiences on a FOB (Forward Operating Base) in a western province in Afghanistan. He and other soldiers worked directly with members of the Afghanistan Army, training them in U.S. Military tactics to fight on their own soil.
About halfway through our talk, the Sergeant received a text message. He read it without expression, then put his phone back in his pocket. Next, we talked about the nitty gritty details of women in combat support roles, and the more realistic ways in which an officer such as my character might actually die. It was, surprisingly, an easy conversation. Growing conditioned to death—“justified” or not—I suppose, is all part of fighting a war. “See,” said the Sergeant, pulling his cell phone back out. “This is the text message I just received. Another one just died.” 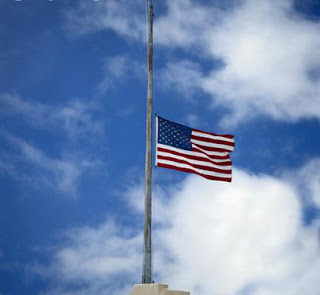 It wasn’t long before we talked about his personal experiences while abroad. “Afghan Army by day,” he told me, “Taliban by night.” What he meant was, even though the men he trained were killing other Afghanis on their own soil, there was always more behind their motivations than to simply fight for the Americans in the name of freedom. Many of them had tribal affiliations to weigh in, previous wars they had fought in, and the ever-constant pressures to join the Taliban or Al Queda. “Take your pick,” the Sergeant told me. “If they wanted to fight, and they all them did, there was virtually an endless number of causes, tribes, methods, and places for them to do so.”
I won’t quote it in full, but the Sergeant forwarded me his text message and here is the run-down on the Michigan soldier for whom flags were lowered last week:
“Flags to be Flown Half-Staff Friday, April 30, for Army Sergeant Michael K. Ingram Jr. of Monroe
LANSING – Governor Jennifer M. Granholm today ordered United States flags throughout the state of Michigan and on Michigan waters lowered for one day Friday, April 30, 2010, in honor of Army Sergeant Michael K. Ingram Jr. who died in  Kandahar, Afghanistan, while on active duty supporting Operation Enduring Freedom.  Flags should be returned to full-staff Saturday, May 1.
Sgt. Ingram, age 23, died April 17 of wounds suffered when an improvised explosive device detonated near his dismounted patrol.  He was assigned to the 1st Battalion, 12th Infantry Regiment, 4th Brigade Combat Team, 4th Infantry Division, Fort Carson, Colorado.  Sgt. Ingram was promoted from corporal to sergeant upon his death.  He also earned a Bronze Star and a Purple Heart at the time of his death…”