Here’s what’s been going on: For days now I’ve been in that deeply immersed space of fiction and anything that interrupts that “dream” is difficult for me to focus on. At times, that means the blog. Other times, that means the telephone, the post office, and my upcoming Interlochen duties.

So while I’d like to continue the narrative about my first time in Interlochen’s summer blues, what I’m really thinking is: My god, this war-writing is rich terrain. Take this quote, for example, from a U.S. soldier on the ground in Afghanistan, filmed by embedded reporter Ben Anderson: “America’s not at war, America’s at the mall.” Or this one, from Vietnam tunnel rat Harold Roper: “We were dogs, we were snakes, we were dirt, we weren’t human beings–human beings don’t do the things we did. I was a killer rat with poisoned teeth.” 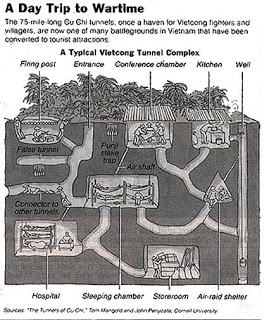 The rhythm rang in my ears all morning: We were dogs, we were snakes, we were dirt. By afternoon, I left the computer to go on a run, small combat scenarios filling my imagination as I bounded along a trail through the woods. By nighttime, I had to change into my summer blues for the New Faculty Dinner. Over small talk with colleagues, I saw flashes of elephant grass as the backdrop to our white-linen meal.

I left as soon as I could, retreated to the house for another episode of Tour of Duty (Vietnam TV mini-series), read another forty pages from Tunnels of Cu Chi and got back to the desk. I emailed Doug Stanton (author of Horse Soldiers) for an upcoming rendezvous, I poured over a map of Afghanistan, and in a glorious, ferocious fit–wrote another short-short.