The Miracle of Meijer

0
0
I made my first pilgrimage to Meijer this week. It’s Michigan’s version of a family-owned chain that’s credited with coining the “supercenter” concept and literally trademarked the phrase, “One Stop Shopping.” In 2005, their sales ranked them in the top 25 of U.S. retailers although they continue to fight ferociously against impending losses from competition like Wal-Mart. Currently, their joint CEO’s are 4th generation Meijer boys, great-grandsons of the Dutch founder himself. 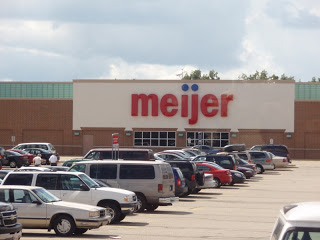 In this “Land of 10,000 Lakes,” as Michigan’s license plate boasts, some things can be exaggerated. But the beauty of a store like Meijer cannot be counted among them. For my Pacific Northwest fans, this store is on par with Fred Meyer (ironically with the same pronunciation), a comparison I thought heretofore impossible. When was the last time you exited the grocery store with 4 stuffed grocery bags for only $66, including organic produce? I went to Meijer and did just that.
To compare, I followed up that stop with one stop at Oryana, the local food co-op of which I am a member. Despite my discount, I walked out of there with 1 grocery bag for $88. That’s right. Eighty-eight. Granted, it’s mostly high-end gluten/dairy free products because of my food allergies, but…really? We’ll see how long it lasts.