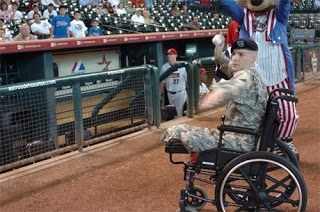 [Wounded soldier throws first pitch at Astros game]
Quote from the mother of SPC Matt Hertlein (age 19) upon his return home from Iraq: “It’s a nice change to have him home and have him goin’ to prom instead of goin’ to a war zone.”
Quote from SPC Matt Hertlein upon his return: “Grass, gentlemen. Grass. I’m about to roll around in it.”
Quote from U.S. soldier in Iraq, singing an impromptu rap to his buddies: “Sadaam Hussein, man, he ain’t done nothin’ to me. George Bush? He ain’t sendin’ his kids over here.”
Quote from begging Iraqi children outside of Bagdhad: “Give me chocolate.”
Graffiti on the side of U.S. operating base: “Home is where you dig it.”
Quote from Iraqi woman driving a car: “We want to decide our own future by ourselves. That is the real freedom.”