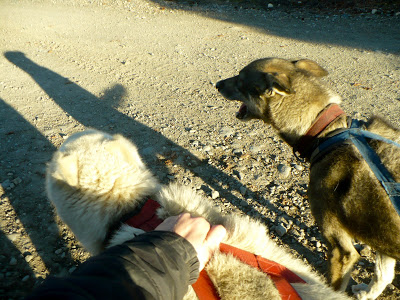 [I won’t attempt accuracy with dog names and gender in this post; I simply couldn’t keep up. Also, forgive the shaky photos. Try holding an ecstatic, 1,000-mile racer with one hand and taking photos with a camera that has a broken zoom lens with the other…] 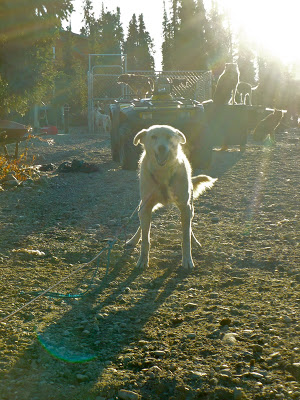 It begins where it must, with one single dog out of 36, selected first for the harness. But make no mistake—all of them are yapping. And leaping. And sending their fantastic howls into the frost-laden morning. DM the dog musher moves adeptly but kindly with her animals, choosing more dogs for the team and slipping the harnesses over their necks, then guiding their front paws through the loops. It’s clear the dogs know what they’re doing, but their enthusiasm is so incessant it’s a good thing DM is there to guide them along. They’re beside themselves with excitement! 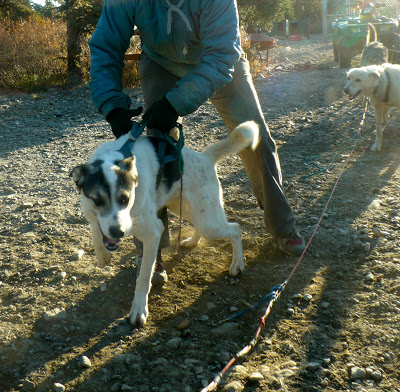 [Younger dogs are mixed in with a team of more experienced dogs to help them learn. Most sled dogs that run competitively are between 2-10 years old. There are so many dogs here at DM’s place because, after a sled dog “retires,” they still care for it, run it lightly, and give it a happy home until the end of its life. “Special needs dogs,” one with cancer and another that’s blind, move into DM’s family home and become pets; actual, housebroken, nose on your lap, lazy day, kind of pets.] 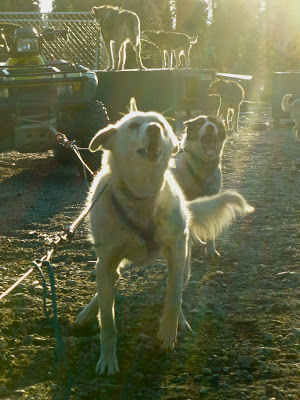 [That dog in back isn’t yawning. Each one has his/her own, unique yowl and accompanying posture for emitting the most sound. This one sounded something like a cross between a wolf and a screeching grocery cart. Even more amazing? I can be sitting with DM in her living room, not noticing anything, and she’ll hear one of them start to talk. “You hear that?” DM might say. “I know exactly who that is. That’s [so-and-so] and she’s about to go into heat. She’s a real flirt. [Such-and-such] who we ran this morning has eyes for her.”]
The clips for the tug line and neck line are impossibly small to my eye, but DM clips each sled dog in with ease and in no time at all we are hitched and ready to go. If there was ever any doubt in anyone’s mind that running is exactly what these dogs want to do, bear in mind this photo of two lead dogs in the first team we ran that morning: 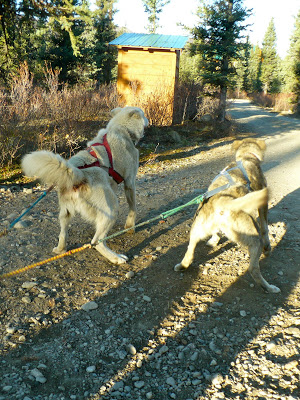 Hind legs braced, bodies thrusting forward, wriggling with enthusiasm…we can’t seem to move fast enough for the dogs, yet therein lays the catch. A good dog musher like DM knows that a dog’s determination can outrun its physical abilities. That means her job as a dog musher has as much to do with making sure they run safely as it does that they run at all. This translates to logging enough miles to train appropriately, making sure it’s cold enough to do so, and keeping the speed at a safe level to emphasize endurance. Not to mention using a “sixth sense” to read which dogs have their hearts in it and which ones simply aren’t up for the challenge. It’s not about how much weight they pull or how fast they run, but how consistently and smartly they train over time.
Until the snow accumulates enough here, DM has to use a four-wheeler to run the dogs. The machine plus the two of us probably weighs around 600 pounds and we have 8 dogs pulling us between 8-10 miles per hour. The four-wheeler’s in 4th gear while all of this is happening, and DM steers along the rugged trail, trying to save our backs from tree stumps and roots. “If I put this into neutral they’d just take off,” she explains. “It’s all about momentum and teamwork.” 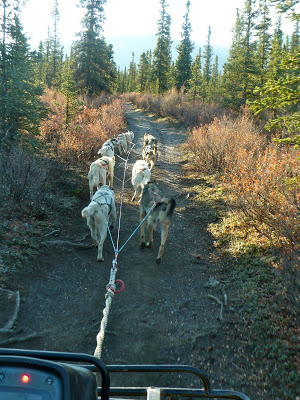 What’s most astonishing to me is the moment right after we start moving. There is no sudden jerking forward. No awkward, strained heaving from the dogs. Just a simple, slow glide that starts gently and cruises along without trouble. The dogs we aren’t running fade into the distance and the team ahead of us immediately transforms from a leaping, hyperactive mass of dogs to an in-line, well-mannered, utterly silent and cohesive unit. 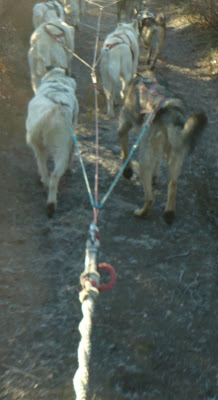 [A real crab…rear right dog, the newest in the bunch.]
Straddling the four-wheeler, we run two teams that morning and talk about the sport and lifestyle as we ride. There’s a lot to learn and I’m trying my best, but parts of it are pretty darn technical. Of course, DM sees a lot more than I do from our perch on the four-wheeler. “The wheel dog on the right is a real crab,” she says, when I ask about its gait. The other wheel dog trots along easily, but this one is loping and jogging, sometimes straight and sometimes sideways. “That’s what we call the ones that lean like they’re moving sideways when they run.” In addition to analyzing their gaits, she can tell me which dog has run which races, which ones have finished, which ones came from which litter, and what each of their temperaments are like.
During the peak season, a dog handler logs their training miles, etc. but for now, DM can do most of it in her head. She’s been at it long enough. “But what if you mix up any of the dogs?” I ask. She laughs a little. “Mix them up? That doesn’t happen. It’s like being a teacher. After the first day, you know all the kids’ names and you know their faces.” But she’s also being humble. There’s a lot of work running a ranch like this, as this small but helpful tool shows: 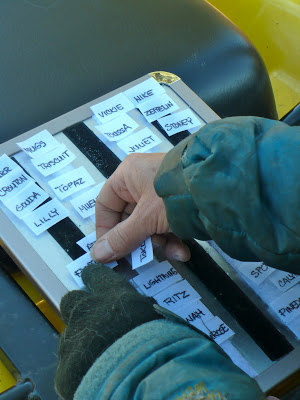 [The dogs are named thematically depending on which litter they were born into. Gouda, Sharp Cheddar, Brie. Triscuit, Crouton, Ritz. You get the picture…They take turns running and boards like this help DM determine who gets to go when.] 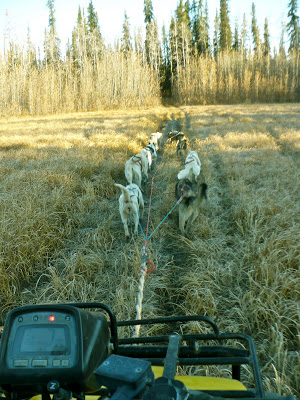 As we move across a beautiful field, DM steers the team with ease at just the right moments. I had imagined some sort of steering device and lots of shouting, but it’s all vocal and she doesn’t even raise her voice above the level she’s been using to talk to me. She says “gee” for a right turn, “haw” for a left turn,” and later—when we come across a random man in a random cabin in a random place in the woods—she says “On by!” which means keep moving on by, past the guy/cabin/moose/horse packers/giant purple monster in the way. 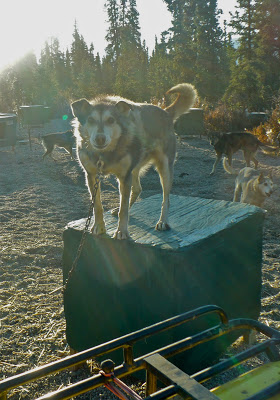 [Hey, old-timer! Don’t worry, you’ll get your chance!]
What do we do when we’re finished? We do it all over agagin. Just ask this guy, who didn’t get to go that day. Not to worry. He’ll go the next day. I take a few steps toward the old-timer and he nuzzles his face into my palm, all wag and wiggle. It’s a good life.