0
0
First, there is a quickening of the heart like one thousand hooves charging up a mountainous, scree slope. Then, there is the electricity of neurons firing to all four limbs—that same magnetic pull that lured me 8 miles out of Anchorage the day I got off the plane and just kept walking. The only thing that stops the magnetic force of Denali National Park & Preserve from overtaking my entire rational and physical self is the sheer, untouchable magnitude of the Alaska Range. 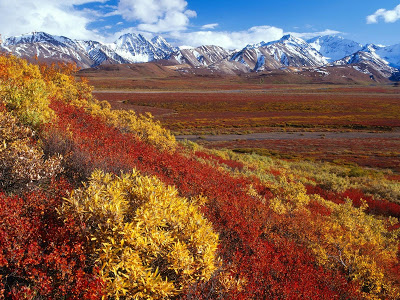 [Fall colors, Alaska Range]
The peaks rise impossibly from the horizon, their carved white slopes like a mirage highlighted by the ever-arching Alaskan sun. Surrounded by 5,000 and 6,000-foot “foothills,” the range beyond boasts Mt. McKinley, the highest peak in North America at 20,320 feet. When I look at these peaks, everything in the periphery bleeds out of focus, leaving what feels like a firm, unbendable line between myself and the tops of those mountains. I have never desired to become a high alpine climber, but I like to think that the treacherousness and exertion of such climbs entails the kind of endurance that I strive for in life. Perhaps, after all is said and done, it’s the “staying power” of mountain living and hiking that lures me the most—the notion that nothing comes easy unless you’re in it for the long haul, in which case the hard work is always hard, but likewise always tangible and relevant.
A Ranger-guided walk (perfect for blistered heels) helps me identify the tundra plant life: bearberry, soapberry, lupine, fireweed, willow, alder, dwarf birch, timbre berry, dogwood. Tree names seem easy enough: black spruce, white spruce, aspen, paper birch, and balsam poplar. 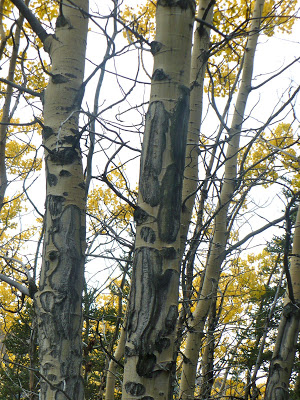 [Bark “scars” on aspens are typically a result of moose nibbling on the trees.]
With the exception of one paved road, the vast majority of the park has no trails, no buildings, no roads, and very little human intrusion. Unlike Yellowstone and Yosemite, where cars can line the highways for miles and miles, only park-sanctioned buses are permitted beyond the first few miles of the park. What few groomed trails there are, exist almost entirely within these first few miles. In just two, short visits, we walk the Savage River, Taiga, Horseshoe Lake, McKinley Station, and Riley Creek Trails—all tame compared to almost everything I’ve ever done, but I’m not above guided hikes and I’m certainly grateful for the easy walking and helpful ranger resources.
In addition to plant life, I’m reminded of wildlife within the park: wolves, black and grizzly bear, moose, caribou, lynx, red squirrel, and snowshoe hare to name a few. My first day in the park, we stood about 15 feet away from two hard-muscled rams feeding along Savage Creek, no zoom lens required. 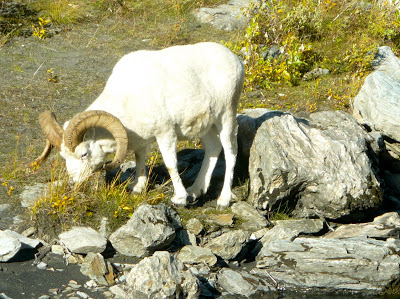 Later, when I was the only person who showed up for an afternoon hike, a young Ranger (and year-round Denali resident and dog-musher) took me out of the way to a new suspension bridge as seen below. My nonfiction chapbook, Lost Crossings, is a 60-page ode to such bridges, so finding a treasure like this 5,000 miles away from the ones I explored was a real treat. It’s worth noting, too, that those gigantic timbers were hauled by sled dogs over frozen Riley Creek last winter, then erected this spring by an NPS trail crew. 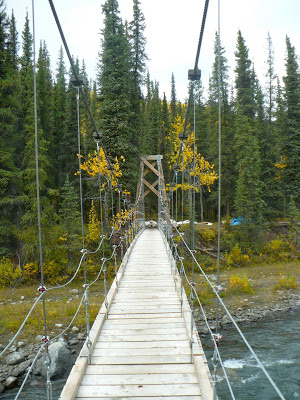