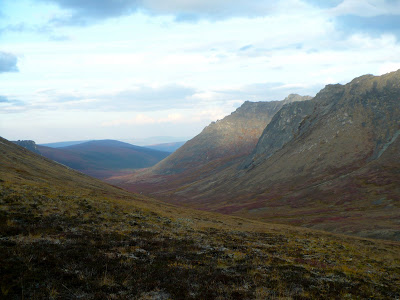 [Farewell view of American Creek Valley]
We woke to frost each morning, especially thick on Day 4, and cooked our favorite meal of tundra-picked low-bush cranberry, crowberries, and blueberries with hot barley cereal, stewed walnuts, and dried cherries. The fruits were so abundant you could hardly sit without squashing them. We had two sweet days of hiking ahead of us through the Nome Creek Valley—all rolling just slightly downhill—before getting to the truck. 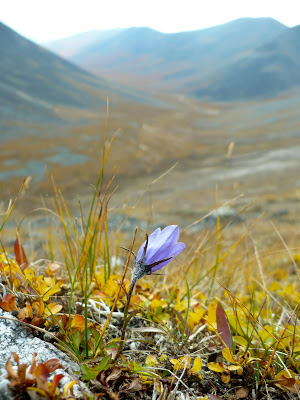 [Purple harebell flower overlooking Nome Creek Valley]
To our great surprise, we summited the pass exiting American Creek Valley and within a few miles into the Nome, picked up a heavily used trail. This was more than a patchy, three-inch wide sheep trail. It looked almost like a human trail. It wasn’t long until we spotted two backpackers who told us they had started out from the Mount Prindle Campground that morning. A few miles later, we saw day hikers, and at that point KB and I dropped our packs and eyed the topo maps.
We had 8 miles to go in order to out of the valley from our base camp—we knew that much—but we had given ourselves two days do it because the Ranger at BLM told us it would be dense bushwhacking with no visible trails. Eight miles of that kind of terrain can easily turn into 12 miles of meandering, and a lot of mental focus on the tussocks through shoulder-high willow thickets. Yet there we were, on what felt like a superhighway, cruising through Nome Creek Valley along a mucky but functional trail, moving much faster than we anticipated. By lunchtime we were less then 2 miles from the truck. 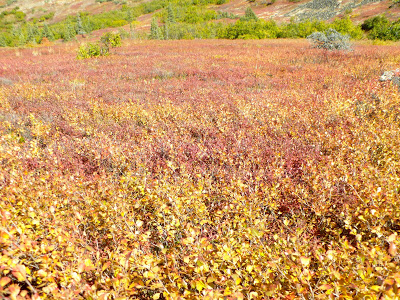 [Tundra colors along the “superhighway” surprise trail.]
That sweetness of being “unplugged” and “out of range” that backpacking allows is so slowly and laboriously gained…yet always so suddenly lost upon re-entering “the real world.” If the skies had been clear and the wind only a soft breeze that afternoon, we would have stayed in the valley ad lounged on the tundra, reading and relaxing and wandering along the nearby hills just to savor that sweetness one day longer. But the wind was relentless and the clouds gathering for rain. We ate a leisurely lunch, marveled again at how swiftly the miles had gone that morning, then put our packs on for the final few miles out.
I hated leaving. But staying would have been pretty chilly and damp, not to mention the other hikers we would likely continue to see due to the start of the three-day weekend. The moment we closed the truck doors and put the keys in the ignition, the skies opened up and rain started to fall. We said goodbye to the tundra, popped in a Be Good Tanyas album, and headed south for Fairbanks.
What would have been 10 days in the Brooks Range (if Alaska hadn’t had such a cold summer and early fall) was amended to 10 days just south of the Arctic Circle in the White Mountains, which was then further amended to 5 days in the Whites (due to KB’s family needs in Anchorage), which ultimately turned out to be 4 fantastic days, 3 valleys, 4 passes, 1 high peak, and a head full of fall-colored tundra plant life that was all wholly blessed by the weather gods. I left happy and heel-blistered but hungry for more…Denali, here I come!
Showing 2 comments