0
0
Folks might be wondering why I keep talking about the “gumbo roads” of high desert Wyoming. For an explanation, I look no further than my trusty dictionary of landscape terminology, Home Ground, in which Gretel Ehrlich defines gumbo in the following way:
Gumbo is clayey soil that is extremely waxy and sticky when wet, as during times of thaw or during or after a rainstorm. Gumbo terrain is referred to as “ape-shit flats” by cowboys on ranches in north-central Wyoming, who are well acquainted with the gooey substance. Early Midwest settlers also struggled with the difficult soil, as indicated by Emmanuel and Marcet Julius Haldeman in their 1921 bestselling book Dust, about farm life in Kansas: “It had rained earlier in the week and Martin was obliged to be careful of the chuck-holes in the sticky, heavy gumbo soon to be the bane of pioneers.” Gumbo is found throughout the south-central United States, where a number of shallow seas once covered wide areas of marine shales and mudstones. Gumbo does have its good uses: the soil makes excellent adobe mud for structures, and bentonite, a type of gumbo created from volcanic ash, is used for well casing and to line duck ponds. A synonym for gumbo is burnout soil.”
The Resident’s House (photo shown in yesterday’s post) is made of gumbo adobe. And the downtown streets of Lust, Wyoming, as shown in the historical photograph below, once looked the definition of this goopy stuff: 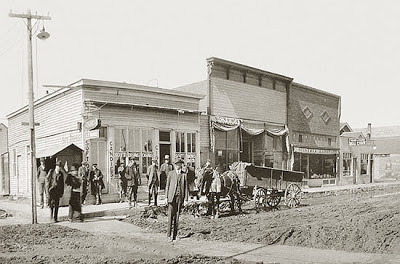 This time of year, the gumbo roads are fairly reliable. In a few weeks, they’re be frozen and as hard as concrete…that is, if they aren’t entirely buried in snow tomorrow. The forecast: highs in the 20’s and snow for the next three days.