Yesterday, the high plains of Wyoming pulsed with the most enchanting, electric gray color I’ve ever seen. Wind roared across the prairie for hours, carrying sugar-fine granules of snow that coated each blade of shortgrass, each tawny branch of chokecherry, each hushed, green sliver of sage. 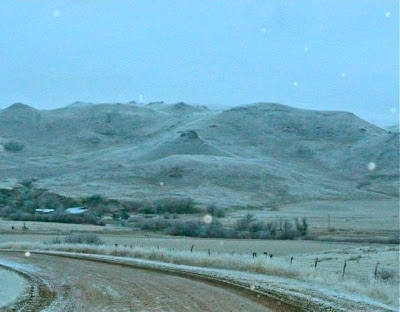 After a short trip to town, we drove back through the settling dusk. Mule deer lined the roads and fields, their timidity diminished during the rut. This is the most precious window of the day here—the in between time after daylight but before nightfall. Even with complete cloud cover and snow blurring our vision, the landscape appeared immensely rich in color; shades of green, white, gray, and blue subtly brought hue to each relic of the land.

Back in my studio, I flipped through Home Ground edited by Barry Lopez and found author Mary Swander’s definition of a plain:
The American Great Plains, an immense sweep of land that stretches east of the Rocky Mountains in the United States, covers part or all of New Mexico, Texas, Oklahoma, Colorado, Kansas, Nebraska, Wyoming, Montana, South Dakota, North Dakota, and the Canadian provinces of Saskatchewan and Alberta. A plain, or a broad, flat, level expanse of land, supports prairie, or grasses, flowers, herbs, and a few trees. Euro-Americans referred to the prairie as a sea of grass, a treeless wasteland, a place where one could easily become lost without landmarks or bearings. Native Americans—Lakota, Arapahoe, Crow, Cheyenne, Kiowa, and Comanche—knew it as a lush grazing land for the bison that provided bountiful food, clothing, and shelter. Robert Louis Stevenson, in Across the Plains, described the Great Plains as “a world almost without feature; an empty sky, a empty earth, front and back.” Willa Cather, in Death Comes for the Archbishop, offers a strikingly different portrait of the plains sky: “The plain was there, under one’s feet, but what one saw when one looked about was that brilliant blue world of stinging air and moving cloud….Elsewhere the sky is the roof of the world; but here the earth was the floor of the sky….the world one actually lived in was the sky, the sky!” In more current times, crops such as wheat have replaced the prairie grasses and cattle have replaced the bison in the semiarid environment, which generally lies 1,000 to 6,000 feet above sea level.
Comments