Jentel Day 9: Life in the Icebox

0
1
The temperature ranged between 4 and 10 degrees today, with overnight lows for tonight expected to hit negative 7. CC, the photographer, hopped into her car at dusk for her daily drive to the top of a nearby hill (3/4 of a mile from Jentel) where she gets cell reception. I came along, desperate for a chance to “move” and see something other than my window views. I ventured from the semi-warmth of the car for a few minutes and she took this shot of me, foot cast and all, ambling across the frozen road: 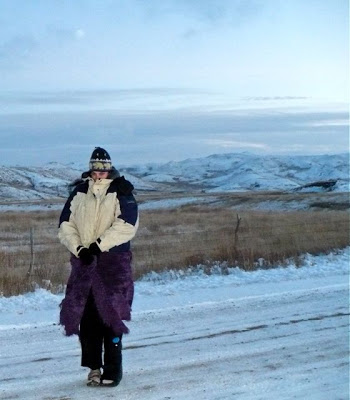 [little me, big boot]
The light at this hour of the day is unmistakable. A gentle, electric blue settles over the foothills and the frozen grasses stand erect in the fast winds, brilliantly yellow in the day’s dying light. Laura Bell, in her memoir about the Big Horn Valley called Claiming Ground, calls this color on the mountains the “salmon wash”: 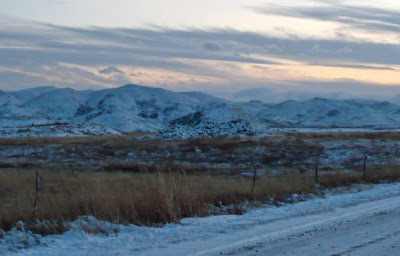 To think that the Sioux, Crow, and other Native tribes lived in teepees on this vast expanse of exposed landscape…that families were born and raised, traditions passed on, and battles fought—some won, most lost. It’s as humbling as the frigid air itself.
Comments