Back at the Dojo…On the Sidelines

0
1
One major part of life on the road has included my independent martial arts training. I left North Carolina 11 months ago as a brown belt. My teacher, Hanshi, and I agreed that I’d call and write often, which has turned into a daily exercise log of all my physical activities. If I exercise, I write down exactly what I did. If I don’t, I have to write down that I did nothing that day. After two weeks, I print out the log and mail it to Hanshi with a letter detailing my studies. 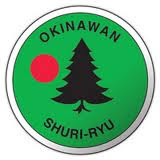 While in Michigan, my studies involved visiting other dojos and taking notes on other forms of martial arts. I trained some in Taekwondo and MMA classes while continuing my Shuri Ryu Karatedo and Shintoyoshin Jiu Jitsu training on my own.
In October I flew back from Alaska, picked up my car in Michigan, and drove through North Carolina on my way to Weymouth Center. Along the way, I stopped at my hombu dojo (home training center) and worked with Hanshi for a night.
Ten days later, I drove to South Carolina for the International Martial Arts Symposium, an event for which I had been training the better part of 9 months. While there, I was promoted to Ikkyu, the third level of brown belt and the final rank before testing for Shodon (1st degree black belt).
Little did I know I’d spend the next few months in a cast and that Hanshi would close the hombu dojo after Thanksgiving, moving himself and his family back to his home state of Florida. It was a great loss for all of us, but Sensei Nate has taken over the kid’s karate class in Hanshi’s absence and last night I was able to visit everyone and be immersed in the art once more.
I’ve been missing the unison and uniform practice of kata, but got to see the kids do it as in Bassai Dai kata shown here: 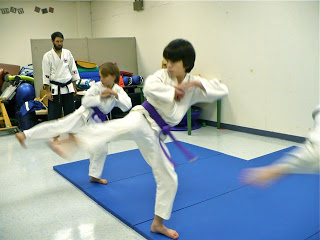 And more than anything, my jiu jitsu (joint locks and take downs) training has suffered due to life on the road because of the simple fact that you can’t really do a joint lock on yourself or grapple with your imaginary friends. The kids class is going great, though, training in pairs and laughing through the tough spots with Sensei Nate as their guide: 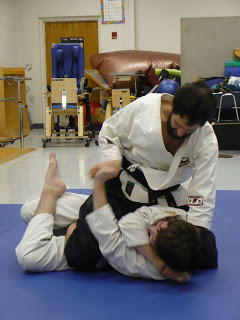 If all goes as planned, by January I’ll be allowed to resume 25% of my normal physical activity levels; then up to 50% by February, and full capacity by March. I suspect it will be 6 months or more before I kick a heavy bag with my left foot, but the point is that eventually, I’ll be back on track with my training and aiming headlong for that Shodon once more. It hasn’t left my gaze, but it’s certainly seemed far off in the hazy distance since I broke my foot.
Comments