Jentel Day 25: A New Part of the Writing Life

Last night I had a conversation that I hope I never forget. Two other residents and myself lingered after dinner, sipping wine and talking about process. I had the opportunity to ask PR, the other writer here, what it feels like for her after she finishes a book.

At first, she didn’t understand my question. “The book never feels finished until I’ve actually held it in my hands,” she said.
“No, but I mean, what about those moments right afterwards? Those weeks? What’s that like?” I asked.
“Oh, well, that’s when there’s lots of proofreading and final teensy editing. And of course, sending the book out to publishers.”
“Right. But not that part. Even after that. When you sit down at the desk and you realize that you’re not going to write anything that fits with that body of work anymore.”
“Oh!” she said, smiling. Then she frowned. “Well that part sucks. And you’d better get used to it,” she said, then laughed. It was as if her face portrayed ever emotion I’d been feeling since I got here. “My boyfriend is really great at reminding me that’s what’s going on for me whenever I finish a book. For some reason, I always tend to forget that awful period right afterwards. Sometimes it lasts for months, seasons. And somehow I forget. But my boyfriend doesn’t.”
“What do you do during that time?” I asked. She was hitting it now, naming the exact place I’ve found myself in my process.
“Oh, I just wrote a bunch of crap. It felt like sending out all these useless flares. Poem after poem, you know, just writing them and knowing that they weren’t going anywhere. But writing them anyway.”
“Yeah…and?”
“And you kind of have to work to reset yourself. Writing prompts. Word play. A different genre. Something, anything that’s going to jar you as far away from the process you were wedded to during the book.”
“So you mean I should probably stop watching war movies and reading war books, right?”
“Right.”
“Then it’s like a divorce, in a way?”
“Exactly.”
So that’s it, I thought. I’m here in a new place. I’ve got to figure out what it takes to nurture myself during this part of my creative process. Call it post-partum, call it a breakup, call it separation anxiety. No matter how you look at it, it’s time to shake things up and look long and hard at what’s going to feed me during these next few months so that I can gear up for generating more material. 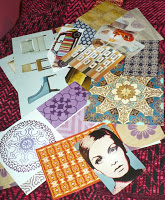 After the conversation was over, I think I figured out what step one is for me: Put on your pajamas, pour a glass of wine, sit by the fire, and cut pleasing images and patterns out of fancy magazines. Make a mess: Let those scraps just fall. Don’t sort them. Don’t worry about conserving. Just CUT. Keep what you like, imagine making gifts or useless decorations out of them. Or just imagine keeping them around for a while, fingering them for no particular reason. Look hard at those pictures; trust them. Know that somehow this small act is the beginning of a new way of nourishing.
Tomorrow? Make step two happen for yourself, whatever that may be.
Comments