0
0
It’s possible to drive right up to Old Chief Joseph’s grave at the north end of Wallowa Lake, but I wanted to approach it through the woods so I opted for the Iwetemlaykin State Historical Site first. About a mile as the crow flies from the lake house, Iwetemlaykin—Nez Perce for “at the edge of the lake”—is considered sacred land because it is the ancestral homeland of the Nimiipuu (“the real people,” or what the Nez Perce actually called themselves).

[Chief Joseph Mountain as seen from Iwetemlaykin. This mountain is actually 4-5 miles long with multiple peaks, the topmost measured at 9,610 feet in elevation.]
I walked along snowy, narrow footpaths for about a mile, winding along the Wallowa River and around the damn, eventually navigating my way to Old Chief Joseph’s grave. As an interpretive sign on the grounds explained: “Old Joseph was a key player in the 1855 treaty negotiations. In 1863 he refused to sign the ‘Steal Treaty,’ which reduced the 1855 reservation by 90% and ceded all the Wallowa country to the United States. After his original grave near the present town of Wallowa was robbed twice, Old Chief Joseph was reburied at this cemetery on September 26th, 1926.” 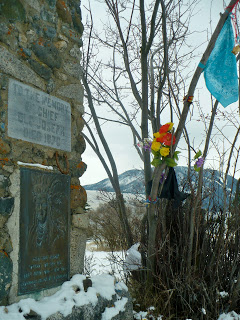 [Old Chief Joseph’s grave.]
I’m not one to romanticize Native history but I’m also not one to brush it off. Writing and living in Wallowa County for the next three months comes with the necessary duty of both bookwork and footwork (time spend walking the land, that is). Every place I look, there are no simple answers. Old Joseph’s grave was within earshot of the damned waters of Wallowa Lake and within eyesight of three McMansion lakeside homes (satellite dishes included). I’m staying in a house that overlooks Mount Howard, named for the U.S. General who insisted on the Nez Perce’s final removal from the Wallowa Valley, despite previous treaties that promised otherwise.
What stories will I come to on my own through this research? What inspiration awaits the further I venture into the snow-filled valleys and summits if this great range? If the bookwork and footwork I put into Michigan and Alaska were any testament, I can only hope for great things to come.