0
1
It seems appropriate to begin my explorations of Enterprise with what was here before. That is, before the Court House was built and before the Wallowa Chieftan set up shop and before—as I’ve been told—spontaneous rodeos took place on Main Street.
Before.
At the foothills of the Eagle Cap Wilderness, this upper flat expanse of the valley is especially alkaline. Deer, elk, horses, and later ranch cattle lived off the grassy hills and salt-lick soils. The Nez Perce called the alkali flats Tom-mah-talk-ke-sin-mah, meaning “white fluffy.” Along the western edge of the flat, the Nez Perce annually set up teepees at Trout Creek and used willow-woven fishtraps during the spring run.
William Bennett was the first white settler in 1872 and Tom-mah-talk-ke-sin-mah didn’t roll off the tongue too easily. Soon it was called Bennett Flat, later it was called Franklin, for a minute it was called Wallowa City, and finally it became Enterprise. With a name like that, what more could anyone expect but quick organization and the election of Wallowa County’s first Justice of the Peace, W.W. White. White was elected by a vote held in a log cabin with 6 Democrats and 2 Republicans present. (Of course, you can guess what White’s party affiliation was.) 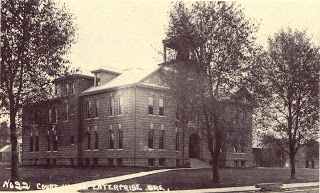 [Wallowa County Courthouse, Enterprise, OR. Constructed 1910.]
Like many buildings in downtown Enterprise, the Courthouse is made of famous Bowlby stone from the nearby Swap Creek Quarry. “Tuff” is a type of porous volcanic rock that, to the pleasure of many stonemasons, saws easily when damp but dries as hard as concrete. When the Courthouse was built, it sold for $1 per cord.
According to my trusty Home Ground dictionary, tuff is also called “punchbowl” and is a type of volcanic crater; “a broad cone with a saucer-shaped interior, built of ash that has weathered and cemented together into a rocky material.” In the days of the old American West, such craters were considered the work of the Devil according to white Christians. But according to native Indian populations, punchbowls were sacred enough to serve as burial grounds for some chiefs.
Nowadays, tuff-punchbowl-Bowlby stone is still praised for its uniqueness in the PacNW, including Enterprise’s own annual Bowlby Bash!
Comments