0
1
First things first, what is a fishtrap, anyway?

We can thank Rich Wandschneider in Wallowa County: People, Places, Images for the following explanation: “To the Nez Perce people who lived here, a wallowa was a fishtrap or, more accurately, one of the tripods build of saplings, which anchored a fishtrap onto the riverbank. To children living here now, Fishtrap might be a writer visiting their school. To hundreds of people in the Northwest, Fishtrap is a writing workshop and a gathering they have attended at least once since 1988…That first July, a hundred people came to hear Ursula LeGuin, James Welch, Bill Kittredge, Craig Lesley, George Venn, Kim Stafford, and Alvin Josephy read and discuss the writing world. Since then, more than 150 writers, editors, agents, and publishers have read and taught at sessions held twice a year. Writers, teachers, librarians, and readers now gather from all over to meet each other and hear the voices of the West.”
Second things second, where exactly am I living in Enterprise, OR? 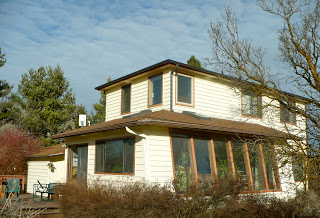 We can thank the Wallowa County Chieftan for helping me realize that I live less than 1/10 of a mile from the Wallowa River Bridge and the Simpsons’ house described in this week’s headline news, “Cougar Stalks Woman at Edge of Enterprise”:
Alece Bohnenkamp showed up on the Simpsons’ front porch about 8:20 p.m., pounding on the front door and screaming for help…Going to meet a friend, Bohnenkamp started walking from her house, down a long driveway and onto Fish Hatchery Lane toward Enterprise. “When I got about halfway down our driveway, the hair on the back of my neck stood up…I felt like I was being watched and as I walked I kept turning around, checking the see if I was being followed.” She continued despite the trepidation and just as she crossed the Wallowa River Bridge next to the Simpsons’ she first saw the cougar’s eyes. “It was only about 10 or 15 feet away from me. I threw rocks at it but there was nor reaction. Then I just turned, ran and banged on the Simpsons’ window.”
Third things third, who can explain the phenomenon of glowing fields in the distance on an overcast day? 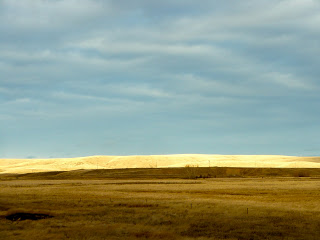 No one can. And no one should. It’s pure poetry and it’s one of the reasons I love it here.
Comments