0
1
After almost three weeks at Wallowa Lake in Joseph, yesterday I moved 8 miles down the valley to Enterprise (population 2,000…the biggest town in a hour’s drive or so). Fishtrap headquarters are located here, where pleasant company of friends and writers is always abundant. It’s also where I teach WR122, my persuasive writing course for the college. 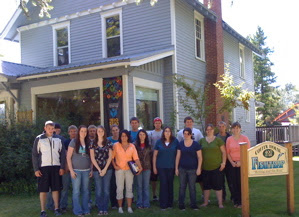 [Fishtrap Coffin House in summertime, with some happy workshop participants on the front lawn]
One mile from the office, I’m set up in a beautiful family home where I live rent-free and feed a 17-year-old cat once a day.  I’ll post photographs when I get a clear day. Meantime, Tiny the cat, as she’s named, winters here in Oregon while her owners head to Hawai’i. Her life’s not so bad, until you consider the fact that this morning—my very first morning with this cat under my sole guardianship—I awoke to find Tiny stuck in a mousetrap. Not the whack-snap-blood kind, but the step-stick-impossible kind. 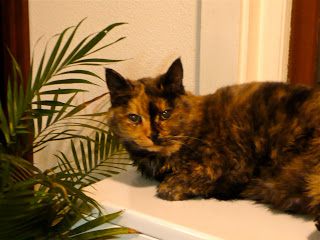 One paw was completely stuck to the trap and Tiny balanced on three legs, frantically shaking the forth limb in the air. Just as soon as she slapped the trapped paw down onto the floor, she tried to move and realized her other paws were stuck as well. Somehow, she’d walked across the trap and gotten glue on all of her paws. I caught her just in time, the tender pads of her paws peeling away from the floor with painful slowness. No flesh was lost, but it had to hurt.
Tiny’s next move proved almost as fatal and I should have seen it coming. I held her trapped paw steady to keep her from sticking to herself, then she placed all three of her free paws on me. When I tried to pull the frantic cat off of me, two paws came free but another one stuck.
Mind you, all of this was happening before I’d had my coffee and about an hour before I had to be in a classroom in Joseph. Additionally, Tiny’s owner was on a plane somewhere over the Pacific and the local vet’s office was backed up for Annual Vaccination Day.
The only way to keep things from getting worse was to hold Tiny away from my body, suspended in the air, until help arrived. If I set her on the counter, she stuck. If I held her too close, the super-glue-like substance on her paws started to literally merge with the fabric of my clothing. At one point she wrestled from my grip (I have the marks to prove it) and crouched in the corner of the kitchen. When I tried to lift her up, her hind legs lifted into the air and she nearly did a handstand, two glued front paws helplessly tethered to the linoleum.
Just in time, the Fishtrap Board Chair—also an animal expert—came to our rescue. She and her husband took Tiny to the vet, I drove to Joseph High School, and by the day’s end Tiny was home, four paws and all. She’s had a bath (to clean away the wretched smell of the anti-glue-goo) and is walking a little gingerly, but at least she’s all in one piece.

Stay tuned for more starting Sunday, including info about what a Fishtrap actually is, the town of Enterprise, the revision process with elementary school writers, and more!