It might have been Saint Patrick’s Day, but for long stretches of time, the only thing that mattered to me today was the bravery and beauty of these young writers sharing their stories: 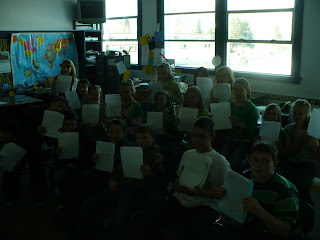 This 4th/5th grade mixed level class told realistic flash fiction and magical realism flash fiction stories. They incorporated sensory detail, specific place, and similes. Although many of them worked from the same photo prompts, their stories were as diverse and varied as each child’s imagination itself. One wrote of a magical apartment with a secret for turning things to gold…but if the tenants grew greedy, the secret turned things to ash. Another wrote of a lonely girl walking through the forest who didn’t feel lonely anymore after she realized that she had the surrounding birds, trees, and clouds as her friends and that, no matter where she travelled, these three things would always be there. Another student wrote about a young boy in the streets of Port au Prince Haiti who found a soccer ball and a pump one day. After that day, his life was never the same as he trained hard and played and dreamed and eventually made it to the World Cup. 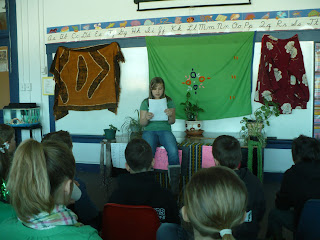 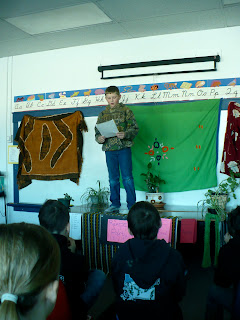 My favorite quote from a 4th grader, when asked what surprised her about flash fiction: “I was surprised by how painful it was for me to stop writing,” she said. (I’m not kidding, she actually used the word “painful.”) She continued: “Because you let us write without worrying about conventions and spelling, I found out that I actually had a lot to say.” Then she laughed, a nervous laugh, but a genuine one at that. In Oregon, 4th graders take a state writing assessment exam that requires them to write a timed short story with—get this—no dialogue and perfect spelling and punctuation. Ack!
Later, in the 11th/12th mixed level class, the high school students surprised me with their appreciation for craft. I’ve struggled with this class a bit, mostly because I think they were expecting I’d teach them under a punish/reward system and I simply don’t do that. I didn’t grade any of their work, but I also didn’t let anyone off the hook. If a student refused to engage, I tried to meet him/her where he/she was and engage them on their turf…then slowly meet in the middle. Likewise, I think some students expected I’d back down if I called on them for an answer and they gave me anything less than their best. If a student couldn’t answer a question, I rephrased it or asked a different one until we came to one that they could answer and feel proud about. I got the sense that many of them were used to being brushed over or ignored if they only gave a half-assed answer. I pushed for more and risked appearing stern in their eyes, but in the end I think most of them appreciated it. 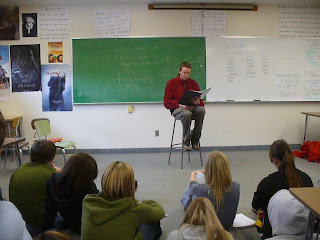 The high schoolers wrote stories with specific, smart language. They incorporated emotional details and action-packed scenes. One student wrote about a young girl who was teased so much that she committed suicide. Another wrote about a venomous argument with her parents. Still another wrote a story about date rape at a rock concert. One boy wrote about the sinking of the Titanic, imagining a family on board. Another wrote about a magical peephole in his apartment that enable him to see into his neighbor’s mind.
I’d been feeling a little uncertain about my efforts in the classroom, but today was proof positive that I am in fact reaching some kids…perhaps reaching more of them than not. Certainly the younger students enjoy what I have to offer. And certainly the older students are dutifully skeptical. But maybe, just maybe, some of those older kids were also a little surprised by their own talents. I was sure pleased with what they read. I hope they remember this positively.
Showing 2 comments