0
0
@font-face {
font-family: “Cambria”;
}@font-face {
font-family: “Georgia”;
}p.MsoNormal, li.MsoNormal, div.MsoNormal { margin: 0in 0in 0.0001pt; font-size: 12pt; font-family: “Times New Roman”; }a:link, span.MsoHyperlink { color: blue; text-decoration: underline; }a:visited, span.MsoHyperlinkFollowed { color: purple; text-decoration: underline; }div.Section1 { page: Section1; }
Wallowa County was officially established in 1887 but even before that, the town of Wallowa boasted the valley’s first post office. Back then, I’ve learned, it was just as common for someone to refer to Wallowa as “Gate City.” A fitting name, when you realize that in the late 1800’s it was the first town speckled along what is now Oregon Highway 82, which runs for about 70 miles from La Grande until it dead ends at the shores of Wallowa Lake.
Wallowa might be a gateway for the great lake at the end of the road, but it has a history all it’s own, too. For many years, the confluence of the Lostine and Wallowa Rivers just outside of town was an important meeting ground for the native Nez Perce. For a time, Old Chief Joseph’s grave was even there.
Back then, riding into Wallowa on horse and buggy might have looked something like this: 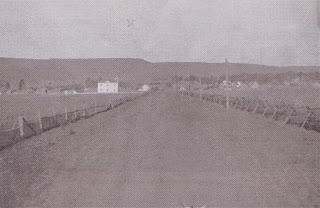 Nowadays (Thank you, Google Images—because no, the grass is not green here yet.), it looks like this: 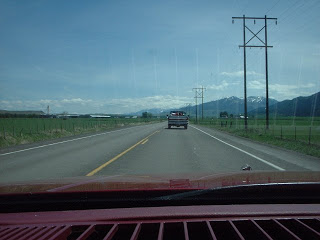 Not too different, if you ask me, and I like that. Today, the population of this town is 870. A hundred years ago, it was just over 1000. The school has seen a 25% decline in enrollment in the past few years and it’s not because people are having fewer children. It’s because people are moving away. It’s difficult to establish a way of life here, let alone maintain one above the poverty line. The graduating class of 2011 is about 20 students.
I went looking for stories today but wasn’t able to find too much. The sign for the train depot is misleading. You turn right and drive three blocks, but come to an old set of tracks and some scratchy fields. The old depot, it turns out, isn’t around anymore.
I followed signs for the Nez Perce Interpretive Center as well—no luck. The librarian later told me it’s closed except on Fridays. This summer, they’ll be open more often though, she reassured me.
But the two older women at the History Center stuffed my arms full of pamphlets and loaned me a book. One of them even wrote her phone number down (they’re only open one day a week too, Wednesdays). I’m only teaching in Wallowa one week, I wanted to tell them. I don’t have much time for research. But they were so kind, so hopeful.
When I got back to my car I looked: most of the handouts were twenty-five years old. One referred to the Nez Perce tribe as “a barrier to settlement.” I took a deep breath. There are so many stories here, so many layers. Different versions of who intended what and which came first. Stories after settlement, of course, but also stories from before—the kind told in another language, through dance, prayer, and ritual.
I think about the back to the land movement that so many of my college pals endorse. I’ve come to believe it’s my generation’s slow and steady for of peace activism. We’re not in the streets and marching on Washington like my parents were, but there’s still a whole heck of a lot of us out there trying to live small, think big, and leave no trace. The optimist in me believes that all of that will add up; maybe later rather than sooner, but it will make a difference. When I think about a town like Wallowa, I wonder about the options for young high school graduates here. It’s no wonder they move away. But who will come back? Who will help life grow here? Land isn’t cheap and rarely sold in single acres. This is cattle country, after all, and that comes with a whole host of other issues.
All of which is to say looking for stories in history is laced with a tinge of the bittersweet when you greet a town that, at least this winter, to my eyes looks sorely in need of assistance. It’s not unlike the project I did on Lost Crossings, which concluded with: “Who is left to cross these bridges?…This piece of our history dangles between heritage and disarray, begging to be rediscovered.”