0
2
@font-face {
font-family: “Cambria”;
}p.MsoNormal, li.MsoNormal, div.MsoNormal { margin: 0in 0in 0.0001pt; font-size: 12pt; font-family: “Times New Roman”; }div.Section1 { page: Section1; }
Today I went looking for the past. I didn’t know if I’d find it and I didn’t even have the exact dates. But I did know that about fifteen or sixteen years ago, my parents and I came to the Wallowas for a vacation in a small cabin up Bear Creek Road.
Not far from downtown Wallowa, this paved road juts south toward the upper slopes aiming straight for National Forest and access to the high peaks range. I passed Hays Canyon, Goebel Canyon, and Elk Flats, and all the while Bear Creek gushed and rushed just a few feet from the roadway, bursting with spring runoff. Still not too far from town yet, and the outskirts of ranch property dappled the roadway in the brilliant afternoon light:

Eventually, the road peters to gravel, then washboard, then a loamy Forest Service road that dead ends at Break Creek Trailhead. But somewhere between where the gravel began and the National Forest Boundary sign, I was hoping I’d find the secret place.
I remember this much: That my friend Lindsay came along and we were eager for something “real.” We’d been reading Thoreau in Ms. Wood’s English class and were starting to get a sense for independence and how to muck our way through the bullshit. On the long drive out there, my dad had bought us a six-pack. I remember working up the courage beforehand to ask this much of him. (Had Lindsay and I pre-planned this request? I can’t recall.) He even tried to let us pick it out at some gas station road stop, but we were too naïve; didn’t even know where to start.
He settled on something and handed it over to us (later—well outside of the shopkeeper’s view), with a very clear understanding: we could share the six-pack between the two of us once we got to the cabin in the Wallowas and we could do this not in town or in the presence of company, but instead in the privacy of a backwoods hunting cabin where experimentation was safe, fun, and somewhat monitored. Certainly we’d each had beer before, but never our own six pack.
Driving down Bear Creek Road this afternoon, I was searching for two things: the old hunting cabin we stayed in fifteen or sixteen years ago, and this special field that Lindsay and I walked to one night, six pack in hand. Stuttering along the washboard, I felt silly, almost lost. How could I ever find it? I had the sense-memory that this cabin was tucked away but just within sight of the road. I also felt it was on the right side of the road and that the field was past the house, across a bridge, and on the left side. All just sense-memory, but fairly vivid nonetheless.
I turned the music off, rolled the window down, and eased into second gear. Coming out of a dense ponderosa pine stand, the road widened at a bend and that’s when I saw it. The tiny hunting cabin: 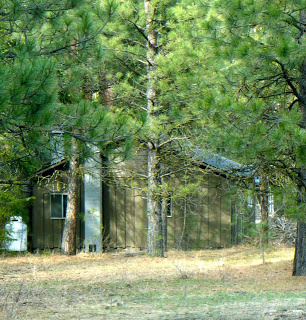 I hadn’t been able to remember it visually but as soon as I glimpsed it—on the right, near a bridge, just within sight of the road—I knew undoubtedly it was the cabin from my family’s vacation.
I downshifted into first and rolled the other windows down. This would be it. If memory served, I’d cross the bridge and fairly soon come to a field. But not just any field. There should be a sort of rise in the road and then a breath-startling clearing that narrowed into the high peaks range. There shouldn’t be barbed wire fences to cross, for Lindsay and I had walked in the dark of night across the bridge, along the road, and then stumbled off the road bank and easily into the field. Then again…fifteen or sixteen years ago. Would I really know it when I saw it? 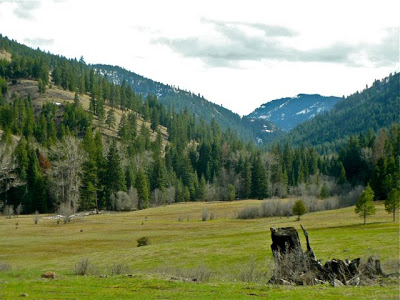 Without a doubt. The field sang with memory for me. We’d brought the six pack here. We’d smoked our Marb Lights (Lindsay probably smoking Reds). And then, as if we’d forgotten we were on a rotating planet in a universe, we’d stared at what remains one of the most memorable full moon rises of my entire life.
We went through a roll of film that night, taking dramatic no-flash photos of ourselves in silhouetted postures with the moon. To my angsty teenage spirit, this was where it was at. The freedom to experiment within means, the companionship of a lifelong pal, and the blessed overpowering moon overlooking it all. The air clung to our fleeces, crisp and steeped with the scent of pine. Thistles and grasses gathered late-night dew as we talked and looked and, for a long time, most certainly sat silently.
Did we stumble back along the dark gravel road completely unfettered? We were giddy with fear and beer and freedom? Or did we walk silently, letting memory store the night’s details without disturbance?
Whatever we did, my memory sealed that night—and the moonrise in particular—with as much of the five senses as it did the sixth sense…that sense of just knowing that what makes a place real is how it feels when your heart beats along its rutted roads. I hadn’t been down Bear Creek Road in half of my lifetime, but like all experiences that become a part of us on a cellular level, if I had to do it right now, I could find my way back in the dark. 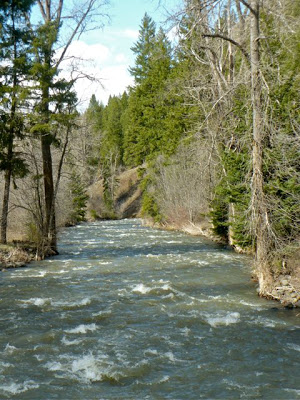