The Canyon Comes to Life

I’ve done my best to describe this canyon as I introduced readers to the Imnaha Writers’ Retreat, but when it comes to Imnaha, not too many writers do it better than Janie Tippet in her book about Mary Marks, titled Four Lines a Day: The Life and Times of an Imnaha Ranch Woman. I’d like to quote her opening paragraphs to the book, which I believe illustrate the rugged beauty of this place better than anything I’ve read so far. To put this in context, the house I’m staying in for April is two-tenths of a mile from the mouth of Freezeout Creek and I went on a hike toward Summit Ridge the other day, from which these photos are taken.
Near the mouth of Freezeout Creek, on the upper Imnaha River in Wallowa County, Oregon, the view extends upward in all directions. To the south, upriver, canyon after canyon is separated by draws and creeks, leading to Jayne’s Ridge, which is nearly all forested. The trees are mainly ponderosa, with cottonwood and alder growing along the river’s course, until the river disappears from sight around a bend. 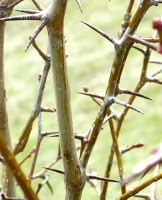 Thickets of serviceberry and wild rose are scattered up and down the steep hillsides and along the “benches,” those high, open, gentler slopes between the vertical rims and above the river. Fences built by early settlers march in straight lines up to barren ridges of rimrock. Sky is at a minimum in these steep canyons, and seems to wander above like a river, allowing the imagination to wonder what lies beyond.
To the east, the view is of the same steep country rising to a high ridgeline. This is Summit Ridge, where, from the fire tower at Hat Point, one looks down on a canyon even more rugged than the Imnaha. Here, the Snake, another north-flowing river, carves its way trough Hells Canyon, according to some, the deepest gorge in North America. The scene is both beautiful and forbidding, where miles of hazy blue shadows in mysterious separations fade into the Bitterroot Mountains of Idaho and Montana. To the southeast, the abrupt, jagged spires of Idaho’s Seven Devils Mountains rise above seemingly bottomless canyons. To the west, the high Wallowa Mountains create another beautiful boundary for this isolation. 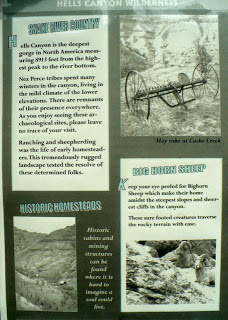 Far below, in quicksilver light, the waters of the Snake gleam as the river winds through rugged canyon walls etched by water, weather, wind, and time. Here, as on the Imnaha, hundreds of miles of silence are broken only by the distant roar of rapids or the lonely sound of the wind. North flows the Imnaha toward its confluence with the Snake, and those waters, soon swelled by the Salmon and the Grande Ronde, empty into the broad Columbia, and thence to the Pacific…
On Summit Ridge, which divides the Imnaha from the Snake, is a low point called Freezeout Saddle. From the saddle one looks down Freezeout Creek to the west and Saddle Creek to the east. The Saddle Creek trail, which dives off into the depths of Hell’s Canyon from the top of Freezeout Saddle, once provided a lifeline to those scattered settles living along the Snake. 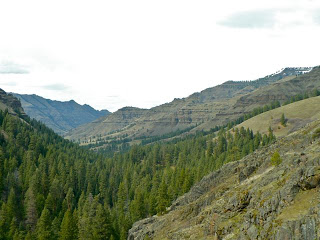 [Photo from my day hike, looking down Freezeout Creek canyon into the Imnaha River Valley] 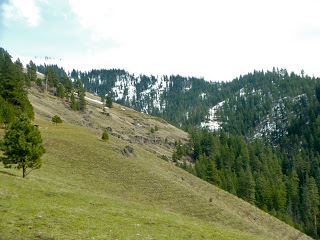 [Summit Ridge as viewed from my day hike. I had to turn back before reaching the top in order to be home in time for dinner and writers’ critique, but you can bet I wanted to keep going!]
A supply cabin which still stands near the mouth of Freezeout Creek was stocked with staples needed by those Snake River ranchers. Men leading pack strings of horses and mules would ride up Saddle Creek from the Snake and down Freezeout canyon to restock their supplies. The only other transport was by boat many miles downriver to Lewiston, Idaho…
Into this land, this formidable land built by scores of basaltic lava flows, came these first white settlers. They would inhabit part of the former homeland of Chief Joseph and his Wallowa Band of Nez Perce… 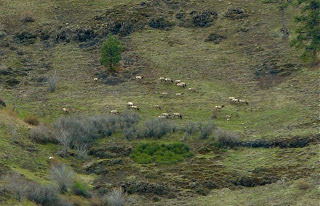 [Elk on the canyon benches. Seems like every time I went on a walk I saw a herd!]