0
4
“You can’t get there from here” isn’t just a saying monopolized by Appalachia. It’s just as true in Wallowa County, where we have 9,000-foot peaks alongside the deepest gorge on the continent, topped by a prairie preserve that rivals the open spaces of the Midwest. I’ve explored the first two, and took some time this afternoon to venture into what folks around here call the Zumwalt Prairie.
My introduction to the Zumwalt began, fittingly, by not being able to get there: 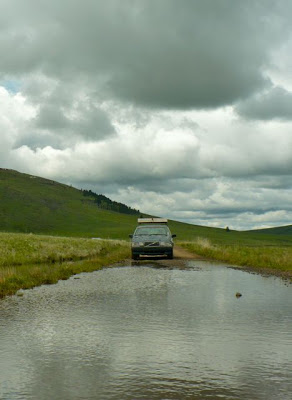 I encountered water 14 miles down a one-lane, rough gravel road, and careful scouting revealed more was to come. I parked THE CLAW, grabbed my pack, and splashed through the water for a few hundred yards before coming out relatively dry on the other side. Rather than tack 4 road-miles onto my overall trip (I was hoping to hike Biscuit Vista Trail), I followed my eyes instead and started venturing across the prairie. 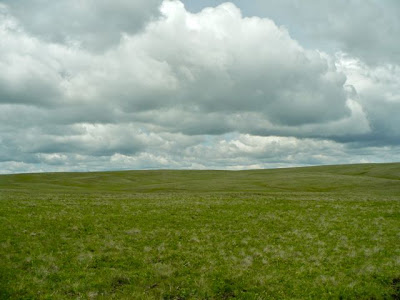 This 33,000 acre preserve is the last remaining grassland of its type in North America and is home to the Columbian sharp-tailed grouse, Spalding’s catchfly, and quaking aspen—each sensitive or threatened species. This afternoon I started a ground nesting Savannah songbird, glimpsed a Swainson’s hawk high overhead, and rustled up countless ground squirrels. Early spring wildflowers were in bloom but my eyes stayed tuned mostly to the ever-changing clouds.
My visit to the prairie wouldn’t have been complete without cows, as the Preserve is bordered by ranchlands on all sides. It’s interesting visiting an ecosystem consciously purchased, managed, fought for, and preserved by The Nature Conservancy and then “exiting” the Preserve to only to run into yet another endangered species—the true cattle hand. Independent ranchers are few and far between here nowadays, as many family farms have been abandoned or sold out to larger corporations. The cattle drive I ran into was being conducted from an SUV and two 4-wheelers, each driven by hand-waving, hat-wearing cowboys and girls, as they tried to hustle their herd along Buckhorn Road. 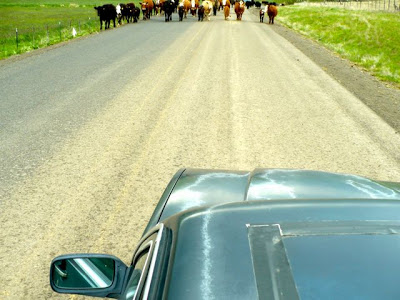