0
1
I’m going to try visiting a new place in Wallowa County every single day until I leave. Yesterday, I hit the Zumwalt. Today, I sought breathtaking views from an old ranch road called Rail Canyon. I’d heard about what it looked like from “up top,” but hadn’t actually timed it right with the late-afternoon angling sunlight. (Sunlight? What’s that?) But just nine miles down Imnaha Highway, Rail Canyon Road cuts to the right, jogs through a pine forest, then climbs steeply until it tops out on old ranch lands.

The near entirety of the Wallowas High Peaks are visible from this spot, and I found myself composing love letters to Volvo as THE CLAW successfully navigated around slipped boulders, through deep puddles, and up steep washboard turns. In all, it took six photos to capture the range end-to-end. But what’s even more startling is the fact that if you turn 180 degrees the other direction, Idaho’s Seven Devils chisel into the sky with astonishing clarity. This, with my broken zoom lens, no less: 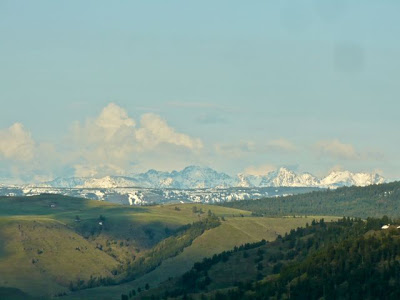 Turn another ninety degrees and the view drops, hinting at the greater Imnaha Canyon many thousands of feet below: 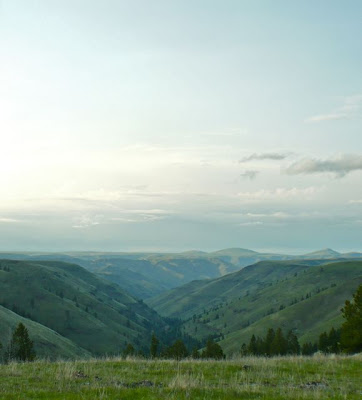 I couldn’t walk too far—private ranch lands lay on both sides of this narrow, saturated road—but I got out and poked around a bit. I came within a few dozen feet of two red tailed hawks and saw my first-ever American kestrel from a distance of just 10 feet! Eventually, I popped open a bottle of wine and pulled out Eric’s copy of Drown by Junot Diaz. In addition to seeing a new place each day before I leave, I’ve been charged with finishing this very moving collection of short stories. It takes a good friend to give a picky writer like me a decent recommendation, but so far the book has not disappointed.
The light settled and stretched across the valley, a swarm of slate gray clouds convening over the distant town of Wallowa. It’s so easy to forget how vast the world is. How even driving to the high points and turning 360 degrees still isn’t enough to take it all in. Where does perception end and the mind take over? How far can the eyes actually “see”? After seventeen months on the road and many sights under my belt, I’m starting to find an answer: No matter where you are, your eyes will only see as far as the heart is deep. 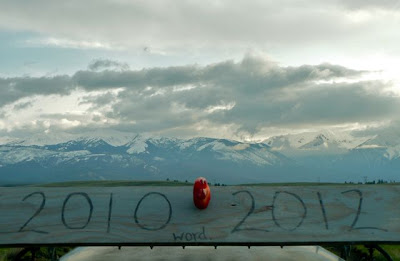