0
1
I woke this morning to a thick, gray light, Michigan’s lake country clouds gathering for rain. By breakfast, a slight drizzle—lasting only a few minutes—cooled the morning and the skies cleared for clearer air. Very quickly, the birds busied themselves with song.
A big part of lake country life is the insects. I happened to arrive during the much coveted and studied Hex hatch. Anglers, biologists, poets—you name it—just about anybody can find a way to be lured by these fellows, whose life span is 1-3 days and whose sheer numbers make them difficult to ignore. Trout Nut’s website puts it best: “It starts like a rise of small trout. There are dimples on the surface, little fingerlings eating midges, perhaps. But these are no fish. The water breaks and up pop the yellow sails of a giant Hexagenia dun, then another and another. A vortex appears in a flash below the mayfly and it vanishes in a slurp so loud it echoes off the distant bank. A square tail like a shark fin breaks the surface behind the swirl as a brown trout twice the size of your net turns back toward his deeper lair. The Hex hatch is on…”
Anne-Marie and I left Frolich lodge this morning to begin the first full day of Writer’s Retreat and were greeted by countless Hex’s on the screen door…and the porch…and the driveway…and our cars…and… 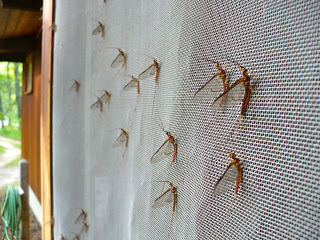 More from Trout Nut: “Anglers who only fly fish once a year drive hundreds of miles to play their part in the drama, while the mayflies themselves make the television news by showing up on doppler radar or calling snowplows out of dormancy to remove layers of Hexagenia duns from the bridges…The Hex emergence begins at twilight and is most intense then, but it often continues to provide fishable action for hours, even past midnight…One night may be so intense the fish can’t find your fly among the naturals, and the next night can seem identical but be completely devoid of flies. Hot, humid nights are best, especially when it’s very dark. There are old-timers who can feel it in the air when it is coming, but nobody has figured out how to put this sixth sense to words. Ernest Schwiebert described one such fellow in Matching the Hatch: ‘According to one local angler I met on the Baldwin, the best nights are ‘dark as the inside o’ yer hat; sorta warm an’ muggy.’”
Walking back from the reading tonight, a flurry of mayflies flitted at the streetlight, hundreds of them buzzing and bouncing into the white, covered bulb, just aching for that final, great ascendance. Beneath them, a virtual pyriamd of dead mayflies filled the sidewalk, bodies strewn and emptied of life. The metaphor in this moment was not lost on me: like so many writers vying for that big break, those mayflies still fighting for the light struck a chord for me. Likewise, those rejected and dejected at the bottom reminded me of the countless many artists who never make it, who try with all they know, and still falter in the end.
“You know,” Anne Marie said to me earlier today. “There are really only about 5,000 of us.”
“What do you mean?” I asked.
“When you think about it, there are really only 5,000 actual, working writers.” She went on, explaining her theory. It felt good thinking about it that way. Just a tiny city of writers, a little pool to draw from. I don’t have to be the best, but I’ve got to be in the top 500, say, if I really want to pull off the writing life I envision for myself.
What is that, exactly? It’s funny how rejections can clarify an answer (I got two more of ‘em today. Yeesh.) Here’s something I’ve known for a while but am only recently articulating: I want to be a respected writer. That doesn’t have to mean famous and that doesn’t have to mean rich (although either of those would be fine, too). But first and foremost, respected for my publications. I also want to teach in a low-res MFA program. I want to continue my independent editing/critiquing service. And I want to somehow always be associated with TRACHODON or another literary publication. For 18 months now I’ve been thinking that means a book and/or postgraduate fellowship are the necessary next steps for these goals. Now, I’m realizing another year of residencies on the road might be the only next step.
There it is, world. My Hex hatch, in plain sight and in the public domain. A flurry and flood of dreams leaning toward the light.
Comments