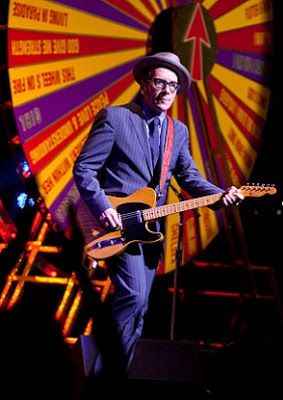 Mini-lectures on the craft of nonfiction. A fine poetry reading. A thrilling novel reading. A craft lecture on 3rd person narration. A rockin’ concert at Interlochen’s Kresge Auditorium, where I got to see Elvis Costello & the Imposters from 10th row seats (thank you, faculty discount!). What a truly rich and full day!
Costello had a gigantic song-wheel up on stage (maybe thirty feet tall) and these go-go dancer girls in platform shoes who grabbed people from the audience to spin the wheel, which determined what song would be played next. The band played for about two hours, effectively nonstop. For the last 40 minutes, 80% of the audience was on their feet, with perhaps 100 folks slammed up against the edge of the stage, bouncing and twitching to the beats.
It often takes permission through something transcendent like a poetry reading or a live concert for me to acknowledge the transition I’ve gone through. In the screaming darkness of the crowd, I think I finally realized that I am in Michigan. On East Coast Time. About to teach teenagers for 6 weeks (part time). And very, very far from the Wallowa Mountains. I already miss them, and their people. I left messages for a few pals this afternoon—telling Eric about how I got a new bike seat, telling S about the lack of wheat-free homebrews. I don’t know if they’ll call back or even if I’ll see them ever again.
But I reached out. I tried. As Walt Whitman wrote, I sent out “filament after filament.” This is what I do now. This is part of life on the road. And sitting their watching Costello’s entire body vibrate with his art, infusing the crowd of thousands—ten-year-olds to seventy-year-olds—I had to admit that the road life can be pretty good to some artists. That some people make a life of it forever, so that home becomes movement and movement becomes second nature. And so of course, when “Pump It Up” came belting over the speakers in that telltale, sandpaper, distinct voice of his, I had only one thing to do: get up and dance.
Showing 9 comments