0
1
500 miles from Cheyenne, WY to Omaha, Nebraska. It was a breeze-through state.
Sorry Nebraska, for pictures, this is all you get: 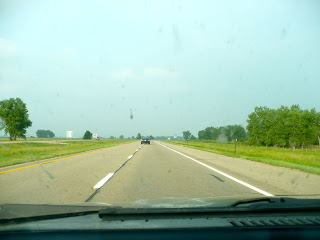 It was a driving day of serendipity more than place. I’d been driving for a few hundred miles,
semis passing me left and right, but often long stretches of open road and no traffic.
In one such open spot, I was driving behind a semi with no other vehicles in sight.
Nope, something told me. Not this truck. You do NOT need to be behind this truck right now.
Indeed, there was plenty of space, so I signaled into the left lane even though I had
no plan to pass the truck. A few seconds later, the rear tire on the semi blew out.
The truck wavered and slowed, I drove on by, ribbons of rubber in its wake. 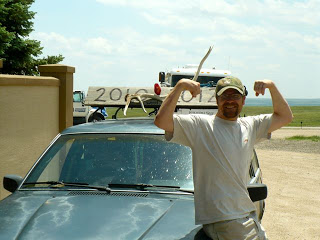 Not long after, one of my best buddies from college (and the guy who’ll be next year’s Wallowa County WIR for Fishtrap) called up. He and 2 other Whitties (as us Whitman graduates call ourselves) happened to be driving from Denver to Minneapolis that day and they broke down on I-80 East, just 90 minutes ahead of me on the road. I started the 2-year tour with 1 week in Oregon at the Pacific Residency with my pal Cam and we haven’t seen each other since…until now, that is! I helped them get to a hotel, we all had lunch, and then I went along my way. What a perfectly wonderful surprise (though not so good for their Subaru). What do you do when you meet 3 pals down and out on the side of the interstate? FEED THEM TRUFFLES, of course! 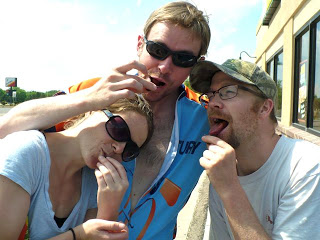