Three Cowboys and a Writer

0
2
The idea seemed simple enough: Friday’s “new thing” would be a long, level hike hovering between 4K-5K in elevation along Bear Creek just outside the town of Wallowa. One canyon over from the Lostine River Road, I’ve certainly ventured to Bear Creek Road before but that was a trip down memory lane. My plan for Friday’s outing had me set on Baker Canyon, which follows Bear Creek gradually upstream for 9 miles before hitting snow (this time of year).
Sunshine poured over the high rim of Hurricane Divide on my left, as snowy columns of rock and pine forest slanted steeply down to the creek bottom. On the opposite side, a slightly less dramatic wall of the same jutted back up from creek bed and into the clouds. With tons of cubic feet of spring water and snowmelt drizzling, splashing, waterfalling, and tumbling down both sides, Bear Creek sang a raging song into my ears the entirety of my hike.
Something in me wanted to hike hard and fast and I did just that—across mud, horse droppings, spring runoff, and scree. Time and again my new Salomon mid-high Gortex hybrid trail runner/hiking boots passed the test. These boots might have the longest name known to mankind, but with twenty years of hiking under my belt I want to go on record saying they’re the most lightweight, versatile, blister-free, comfortable boots I have ever hiked in. Through snow, through creeks, through mud, through wet prairie—I’ve had dry feet for the past four weeks and no blisters (thank you, mid-high model). No matter where I take these and I’m thoroughly impressed: 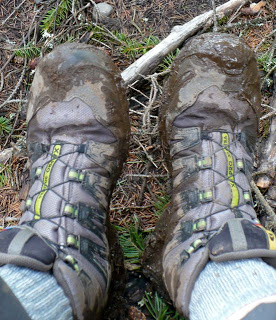 But Friday’s adventure proved much more than an ode to hiking boots. I’ve spent the last few days thinking about it, and while I don’t have the essay put together in my mind just yet, I can at least explain the main events in tonight’s post…
About five miles in, I stopped to eat lunch at the old Bear Creek Guard Station. To my surprise, I encountered three mules, three mares, and three 70+ year-old cowboys. The gentlemen belonged to a volunteer equestrian club that helps maintain trails in the Wallowas, including historic structures such as this one, built in the 1920’s: 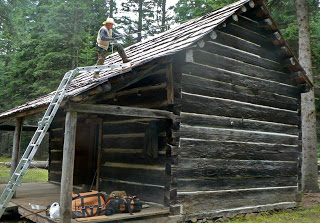 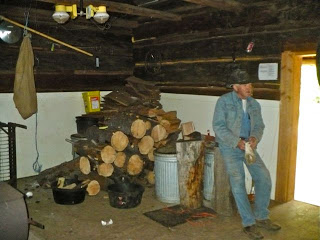 Coincidentally, Dick flew evac and delivery planes for the Air Force for 28 years, including a good chunk of time in Vietnam. He looked a bit taken aback when I told him I’d just finished writing a book about war, but the more we talked the more we found we had in common. One of the planes he used to fly carried wounded and dying soldiers from Saigon to Texas. A story in my collection tells of a WIA soldier who is med-evaced from Kuwait to D.C. in the modern-day version of that plane.

But perhaps the real moment I won these cowboys over was when they discovered I used to dig trail. There they stood, five miles into the backcountry, wearing denim and flannel and wool and hauling crosscut saws, cedar shakes, and every kind of tool or rope you could imagine, all in the name of preservation and equal access. Get Dick talking about “those environmentalists” or “that darn Forest Service” and that’s another matter. But get beyond the labels and the looks and it all boiled down to the same thing: appreciation for the wilderness and mankind’s place within it.
By mid-afternoon I’d signed on to help the cowboys clear a few downed pine trees from the trails and as the sun stretched across the sky and neared the opposite rim of Baker Canyon, Dick-the-70-year-old-cowboy offered to let me ride his Mustang mare “for a little while.” He and the others tidied the Guard Station and saddled up (which took about an hour) and I wandered off trail hunting for morels. Not long after, I handed a few pounds of fresh-cut mushrooms to Dick in exchange for the chance to ride his horse. I’ve been in Wallowa County six months, after all, but have I really been here if I haven’t ridden a horse? I had nearly given up, thinking I’d try and arrange a horse ride for next time. But auspicious coincidence was in the air and by the end of the day my face hurt from smiling so much.
I felt unsure about how it would all turn out, but as Dick let the other cowboys pass, he stayed with me the whole while, telling me stories of the good old days, of his grandchildren, of Vietnam, of the time he rode 11 miles in the dark to get a rescue helicopter for his father (who was ill in a remote hunting cabin), of the Western saddle I was riding (built in 1932), and more… 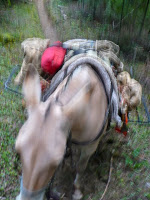 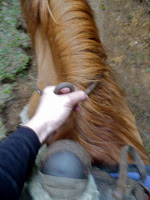 I hadn’t been on a horse in a good while, but like bike-riding, it’s not something you forget. The ease I felt in the saddle made me grin from ear to ear, and the view from “up high” gave me an entirely different perspective on the forest. Before I knew it, Dick had hiked all five miles with me while I’d ridden his mare right out of the canyon, mule in tow. These photos are blurry because they’re taken while riding, but here’s what my immediate view looked like on the way out…much different, mind you, than the view I had of my muddy boots on the way in. There’s only a few days left, but stay tuned for more in this continuing saga of new things!
Showing 2 comments