In Denial About the Dojo Lifestyle

0
2
When I broke my foot last fall, there’s a part of myself I had to steal away. At the peak of my own personal fitness, I’d just hiked over 100 miles in Alaska, flown to Michigan to pick up my car, driven 1200 miles to start a residency in a haunted mansion in North Carolina, then five days later driven a few hundred miles more to train in Okinawan Shuri Ryu Karate at the International Martial Arts Symposium. It was an event I’d been training for nearly a year, and I’d never felt so eager to push my own limits than I felt that weekend. That’s a mouthful, and it doesn’t even come close to capturing all the emotions I feel when I think about how hard I worked to get to that place…and how far I’ve fallen since my injury. 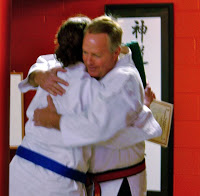 Little did I know last fall, as I trained at the Symposium, my foot was already fractured and waiting to bust in two. I soaked it all in, going from seminar to seminar, sweating bullets with everyone else, trying to keep up. I even volunteered to spar Shihan Hernandez, who trained for many years with my teacher, and who (thank goodness), has a heart of gold. I joked with him later that if it hadn’t been for padding he would have killed me approximately 28.65 times during our 3-minute round. It’s not an exaggeration.
One week after the Symposium, my teacher called to say he’d watched me train and I’d been promoted to Ikkyu (third degree brown belt, just before black belt). The next week, I got my foot X-rayed and was told not to stand unless absolutely necessary for at least two months. Seven months later, I can run without pain in my foot, but you can bet after that much couch sitting that I have plenty of pain elsewhere!
Testing by observation at a seminar isn’t protocol (this is), but my teacher was being flexible because the two-year tour made training difficult. I had gone from 10 hours a week at the dojo in person with my teacher, to writing daily exercise logs and mailing them to him from another state. I trained on my own and explored area dojos wherever I went, all in anticipation of the Symposium.
I won’t write about what I’m afraid I can’t do anymore. I won’t even guess at how hard it’s going to be getting back into this. Sure, I’ve been jogging. I’ve been biking and hiking. But I haven’t been doing kata forms. I haven’t been working horse stance. I haven’t even hit a heavy bag since October. I promised myself (and therefore my teacher) that by June I’d work kata again every week. The month has come and gone and I’ve exercised plenty, but I have trained. Now, I have to compose my monthly letter to him and say this to him all over again.
I’ve never been a quitter. And my writing life needs this kind of focus and discipline, not to mention the bolstered yet humbled feeling I have when I train. Starting again feels like the scariest and loneliest job I could think up for myself at this particular moment, but I can’t let myself down. I’ve got to find a way.
Showing 2 comments