0
4
One of my favorite activities to do with students of any age is creating memory maps for an engaging nonfiction prompt about place-based writing. Working with teens, this prompt is doubly rewarding because 90% of them walk into the classroom saying some version of: “I hate nonfiction, it takes too much work,” “I write enough five paragraph essays in school,” “My life is boring, I don’t have anything interesting to say,” or “Nothing ever happens to me.”
The whole idea of memory maps is to trick the brain by beginning not with words, but with lines. We read a place-based sample essay (I like to use an excerpt from Edwidge Danticat’s “Westbury Court” or Craig Lesley’s “The Carnival”) and discuss it. Then I tell them to clear their desks except for something to mark with. I pass out large sheets of paper and introduce the prompt, helping them think of some place that has emotional resonance for them. (Ok, well, I say a lot more than that, but I’m not going to give the transcript here.) Then, step-by-step, I draw my own memory map on the board.
“You’re the only one who has to understand or be able to ‘read’ your map,” I tell them. “Only you have to know what it means and what things stand for.” I can almost hear the sigh of relief in the room when I say this, because inevitably someone will have already moaned under his/her breath, “I’m not an artist” or “My maps going to look horrible.” My own map and commentary help put them at ease: 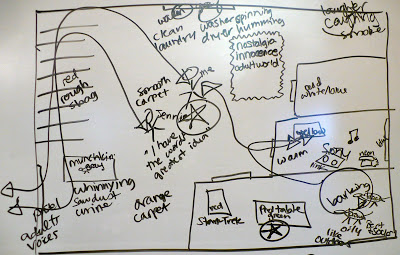 The steps are involved, but here’s a shorthand version of the order of operations: sketch blueprints of basic structures and objects in the place; label (using words) colors, sounds (including dialogue or repeated phrases), smells, tastes, textures, and proper nouns; label movement or “traffic flow” with arrows; mark scene-specific memories with a star; and create a text box to list the overarching emotion, feeling, or mood of the map. If possible, I also ask students to consider what is on “the other side” of the boundaries created by their maps, and to ponder how that contrasts with the world they’ve sketched in detail on their papers. Here are a few examples from today’s classes: 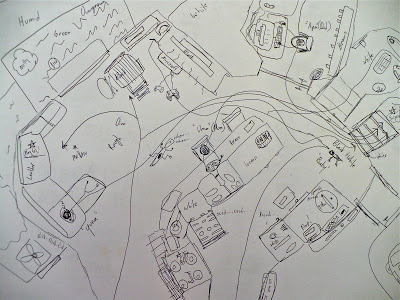 [This one says, “Nostalgia, Joy, Safety, Mellow” in the text box.] 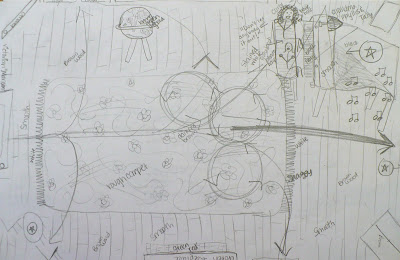 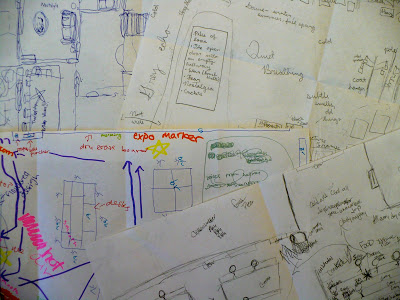 I conclude the prompt by going around the room and asking students to narrate their maps. It’s such a joy to see them get lost in the memory, at first starting to describe their maps rather logically but within minutes falling invariably into a specific memory and telling the class—in effect—a story. Of course, when they narrate, they have their detail-ridden maps right in front of them. One girl said today that, “The candies at that house were so beautiful they looked like glass.” Another said, “All around my father and I heard chattering. Lots of chattering.” Another said she remembered a feeling of “quiet breathing surrounded by the soft sound of crickets in the basement.”
Tomorrow, we’ll begin writing. For now, I told them to sleep with their maps in their mind’s eyes when they go back to their cabins tonight, letting their memories “steep” overnight.
Showing 4 comments