The Decemberists, Live in Concert 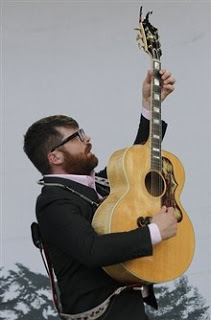 As an Oregonian, I came surprisingly late to the Portland, OR indie folk rock band The Decemberists. ‘Round about the time they formed 11 years ago, I left the west coast for what I thought was a brief adventure but what turned into over a decade. “The Decemberists,” I’d say to folks on the east coast when they found out I was from Oregon. “Yeah, I’ve heard of them…” Then I’d rack my brain for something specific, coming up short. This is not for lack of liking them; it’s just that their rise during the pre-wi-fi and pre-iTunes world coincided with my backwoods-simple-living-far-off adventures, which meant I wouldn’t cross over into fanhood until, well, technically speaking, this year.

For the hard core fans out there, the playlist from tonight’s show follows: “Annabelle,” “Calamity Hymn,” “Down by the Water,” “January Hymn,” “The Bagman’s Gambit,” “We Both Go Down Together,” a song by Sarah Watkins (standing in for Jenny), “All Arise,” “Rox In the Box,” “Dracula’s Daughter” (?) leading into some other song, “Why We Fight,” “Chimbley Sweep,” “The Hazards of Love 4,” “The Mariner’s Revenge,” and “June Hymn.”

Before all this, I’d heard a few songs on mixes, movie soundtracks, and compilations that really resonated with me. A few months ago, S played them at the brewery and one day shared his favorite Decemberists b-sides under the bridge down at Imnaha. Maybe it was the rush of the water beneath our feet that day. Maybe it was the thrumming in my heart from sitting so close to him, sharing one earpiece each as we listened. Or the way it all felt a little like teenagers under the gymnasium bleachers discovering The Decemberists for the first time—that time I’d missed back in Portland when I would have discovered them if I’d never left. Whatever it was, I was hooked, and when I found out they’d be at Interlochen this summer I purchased my faculty discount up-close seats online and anxiously awaited the show.

A distinctly 20- to 30-something crowd speckled with a few teens from the camp and a few older couples from the region, tonight’s concert crowd was bouncing and jiving on their feet most of the night. Semi-hipster styled hair, layered tank tops, groovy dance moves, wrist bangles, overlarge earrings, and denim cut offs adorned this crowd. A few gentlemen in untucked collared shirts accompanied their tanned girlfriends, blouses, big belts and all. For a few moments, though–and especially when the opening band The Head and The Heart knocked everybody out with their short but oh-so-genuinely-rockin’ warm up set–I could almost believe I was dancing with a crowd from back in the Pacific Northwest.

The fog machines worked on overload during The Decemberists’ first set and two encores and whoever designed the lighting gets serious credit for both smarts and timing. “We Both Go Down Together” is a song about drugs and suicide, and as the characters in this narrative song fly high, red, white, and blue stage lights shone over lead singer Colin Meloy’s head. Then with the melodically climactic line, “we fall but our souls are flying” the lights dropped to universal red from stage left to stage right, throbbing over the crowd. During the song “Why We Fight,” army green lights set an eerie tone to this war-era song, and as the chorus lifted into something optimistic, the lights brightened to a heavenly white. 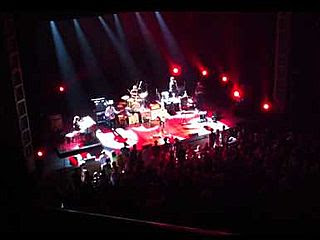 Perhaps a peak moment was when the members of the band forfeited their instruments to young audience members–namely, teens from the Summer Arts music camp–and let them jam on lead guitar, rhythm guitar, bass, violin, and drums for several minutes. Guitarist Chris Funk is, after all, an Interlochen alum. Equally memorable, albeit predictable, was the band’s high-energy performance of “The Mariner’s Revenge,” during which they asked audience members to moan and cry out as though being eaten alive by a whale. We bellowed, the band members toppled face first onto the stage floor, instruments quieted, then they slowly brought themselves “back to life” as the epic rock-opera-like song continued and the mariner did, in fact, seek revenge on a whale reminiscent of Moby Dick.

And perhaps it’s just that–the quirky, throw yourself onto the floor, storytelling aspect of Meloy’s lyrics and accompanying layered musicology that makes me love The Decemberists so thoroughly. Just when you think you’ve got them pinned–Dylan-like in their hymns with harmonica, violin, and guitar; R.E.M.-like with their epic narrative politics woven into melodies; British-like with Meloy’s fooled-ya’ singing voice and the dark/gray/dreary descriptions of his homeland (the Pacific Northwest) that often sound like the shores of Great Britain–they surprise you with a rock opera tune, a two-step fiddle piece, or a hybrid steel guitar ballad with characters you’d take home to meet your mother.

For all the love I can give them, a few things did rub me the wrong way. The shining star of the band, as clearly orchestrated and pre-arranged, is singer/songwriter Colin Meloy. But the quiet star of tonight’s show, in my opinion, (aside from the kick ass opening band) was the lovely and talented Sarah Watkins. She’s filling in for Jenny Conlee (who was diagnosed with breast cancer two months ago). What gigantic shoes to fill and my how she filled them–piano, percussion, violin, vocals, and then some–Watkins was on it from lights up to lights down. She worked her magic from an unflatteringly pushed-aside workstation off-center of the main stage. Meloy barely gave credit to his fellow band members, failing to introduce the drummer or bassist and introducing Watkins by saying “She’s sort of our 6th Decemberist.” Sort of? She’s amazing! Catch her while you can before she’s on to the next great thing. At any rate, later Meloy commanded the audience to hold their cell phones up in the air (like lighters) to create a faux-tecchie ambiance for one of the band’s slower hymns. First of all, put the effing cell phones away. Second, if you have to ask for ambiance then your song clearly isn’t creating it on it’s own, so don’t bother.

But jabs aside, I’d go see this band again and again. The vocals were stellar, the instrumentation spot on, the performance crystal clear. These guys are nothing if not complex, hard thinking, hard working, musical scientists whose layered sounds are reminiscent of the thick and saturated skies of their native Pacific Northwest. The lyrics are smart and precise–one of a kind, really–and the band has that honed, “together” feel that’s hard to fake.