0
4
Last week’s found poetry in altered books was such a success, that I decided to continue the art/writing hybrids this week in my own classroom, adapting an exercise I learned from visual artist Philip Hartigan and author Patty Ann McNair (read the review of her latest book here – WOW!). These two have made a practice of encouraging the art/writing connection and teach Journal~Sketchbook classes around the country when they’re not teaching at Columbia College of Chicago.
I was having a “heart-to-heart” with my students–talented teen writers who take things oh-so-seriously–and asked them to put their hardest questions about writing to the group. “Together, I said, we can help each other out.” Then I waited. A few looked around quizzically. But eventually, all of them spoke. The first brave young writer raised her hand, a pained look on her face. “Just look at this,” she said, thrusting her journal in front of the group, pointing to page after page of neatly written stories that were crossed out to near blackness. On some pages, only a few words remained. “My question is, how do you keep yourself from going back? I can see the whole story in my head. I know exactly how I want it to go. But then when I write it, it’s not perfect. It’s not the way it should be.” 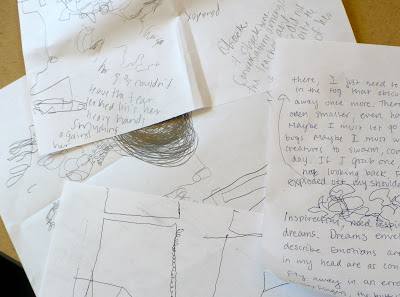 Another raised her hand: “I know how you feel,” she said. “When I write, I see my parents in miniature sitting in the margins of my pages, pointing to my errors.” Still another raised her hand: “I have the same problem,” she said with excitement, realizing she wasn’t alone. “And on top of it I write really, really slowly, so my mind races and the words never get written fast enough.” 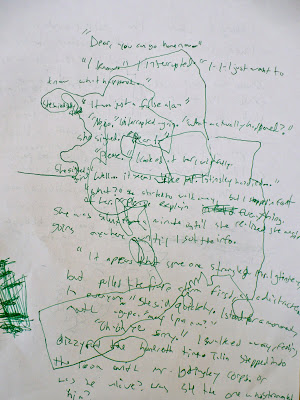 If ever there was a teachable moment, this was it. We talked for nearly an hour then about our internal censors, our editors, our worst critics (one said hers was a troll, another said it was her third grade teacher, another–whimsically–said she didn’t have one). Then we talked about how to boot them out of our brains, off our pages, out of our margins, and out of our heads. Eventually, our conversation returned to that first student’s question and I told them I knew of a writing prompt that might just help her out.
“Do you want to try it?” I asked. Yes, they all nodded. Quickly, I grabbed white sheets of paper and gave them instructions a la Hartigan and McNair about how to do a blind contour drawing. We did this for several minutes (5? 10? Time disappears.) and then I prompted them to return (in thought only) to a scene they’d been stuck on at some point that week. Without looking back at their drafts, they began to freewrite from that scene right over the tops of their contour drawings. Some who didn’t have a scene in mind just did freewriting and word association with whatever came to mind. But most of all, the girl whose notebook had been reduced to black scribbles was writing. She’d get a sentence or two, then reach for her notebook. “Just leave it,” I told her. “Don’t look back. It’s ok if it doesn’t flow or make sense. Just keep your pencil moving.” She pulled her hand back from her notebook and returned to her freewrite over the top of her drawing. Again, her hand inched forward and again I encouraged her gently not to peek at her earlier drafts. Finally, I gave her (and other students) a sheet of blank paper to put over their words as they wrote, completing each line and then covering it so they could move on to the next line without constraint.
By the end these kids were beaming from ear to ear. “How does it work?” one of them asked. “Yeah,” they all chimed in. “How does it work?”
I’m still trying to figure that out myself, but maybe the how doesn’t really matter. It’s working, right? Right. So keep on keepin’ on, I told my students…and that they did. Over the course of the next several days, as I gave prompts a handful of students began by doing blind contour drawings before they started writing. And that first student, the bravest one of all? She’s investing in a sketchbook and her story is over three pages long. 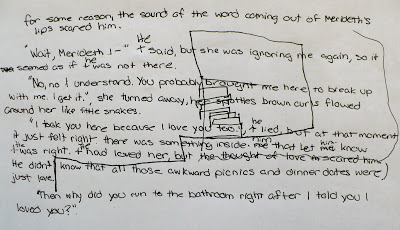