It’s high time I attend to the task at hand which, for me, is always the ongoing relationship between landscape and story. To this end, readers of The Writing Life well know I love quoting from Home Ground: Language for an American Landscape, edited by Barry Lopez. 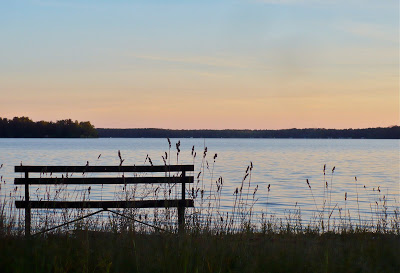 A friend recently took me on a short paddle from Green Lake up the Little Betsie River to, if memory and Google Maps serve, Bridge Lake. But she called it a pond and indeed, by size and feel it certainly seemed like a pond. Then again, I wondered, what makes a pond a pond? What elevates a pond to lake status? If I’m living in “lake country,” I ought to know the difference. Enter, Home Ground.

Sometimes, what needs to be said has already been written. For tonight’s post, I’d like to quote authors Patricia Hampl and Michael Collier who define lake and pond, respectively, in my favorite reference book of all time. Don’t hold your breath–this will take a while–but their insights are well worth it:

A lake is a considerable body of water surrounded by land; or, sometimes, an expanded part of a river (as Lake Pepin, the massive widening of the upper Mississippi River between Red Wing and Wabasha, Minnesota). Lake has traditionally denoted a body of water large enough to present itself as a geographic feature, perhaps opening to rivulets and streams, thus potentially part of a larger, interrelated water system. But lake has proved to be a wonderfully, or perhaps perversely, flexible term and is applied to freshwater forms as diverse as the Great Lakes, which constitute vast inland seas, and small constructed ornamental lakes in parks or even private properties. Lake is also a red pigment composed of a coloring agent combined, usually by precipitation, with metallic oxide or earth to create striking hues such as madder lake (a fierce yellow).

The etymology of lake has been traced to early forms meaning play, fun, sport, glee, games, and tricks, and sometimes “to fight” and occasionally “to please.” In early Middle English “to lake” indicated an offering, a sacrifice, finally a gift. These verb forms are very old, almost forgotten except in lexicons, but they provide testimony that argues persuasively that lake’s etymology is best found in the earliest traces of English out if its Teutonic roots, no, as might logically be assumed, from the Latin lacus. Lake is unobtrusively onomatopoetic, the l and a together forming a plangent, serene sound, combined with the kick of the k, like the soft lapping of a wave. Lake often serves as a descriptive or evocative adjective, as in lake poets, lake country. Two particularly voracious fish, the bow-fin and the burbot, are sometimes called, in jest, lake lawyers.

In Minnesota, a regional usage–“We’re going up to the lake this weekend”–often confuses visitors who assume there is a single lake to which the speaker is referring, when in fact, “the lake” pertains to any lake in the state but also, in the spirit of affectionate possessiveness, to a specific lake that is the speaker’s destination. Used in this way, lake is both a place and a condition, rather in the spirit of its earliest root in play and fun.

In contrast, a pond is defined as follows:

Pond is one of the most flexible words for describing a small body of freshwater. Uplift, landslides, volcanoes, and glaciers can create ponds, as can human beings and animals. Beavers are great ponders, and so are farmers and ranchers who dig them for irrigation and livestock. Glacial kettle-hole ponds such as Thoreau’s Walden and Cape Cod’s freshwater ponds are important features of the New England landscape. George Stewart tells us in Names on the Land that “native peoples” of the Northeast called ponds paugs and that this has resulted in felicitous redundancies such as Mashapaug Pond in Massachusetts. At least since 1641, the English have referred jocularly to the Atlantic Ocean as the “great pond.” And there is no end to the compound forms of the word: sagpond, mullpond, fishpond, duckpond, pondlife, pondlily, and pondyard to name a few. Regardless of size, location, or purpose, any pond can become the radiant and beguiling point of a landscape, even a muddy or algae-covered farm pond that’s nothing more than an isolated earthen water tank. Thoreau thought of Walden and nearby North Ponds as “Lakes of Light” in “which the beholder measures the depth of his own nature.”

Living at Interlochen, “the lake” always means Lake Michigan. But if I’m just going for a “walk to the lake,” I mean Green Lake. I’ll know I’ve been in lake country long enough when I can tell what body of water someone is referring to–proper noun or not–and surely by then, I’ll also be on “lake time.” I’ll leave readers to guess what that is, hinting that’s a close cousin to “island time.” 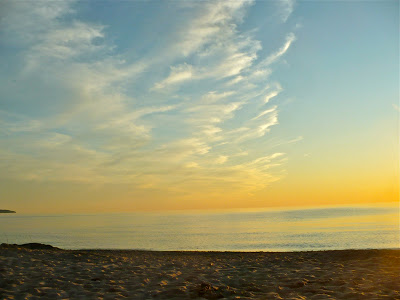 [The lake at sunset.]
Comments