0
1
Last week I felt a little like a bowling pin, receiving news from all directions and displayed in the world with frightening vulnerability. Mornings, it often seemed I woke with a start, bracing for the next thing to run me over. I’d slide out of bed, fingers hitting the keyboard before even brushing my teeth, knowing that at any moment that news could roll in.
And indeed it did: 1 rejection from The Sun and 1 rejection from the editing gig (but with fine compliments from the writer on the panel, which I appreciated), and 1 more rejection from an agent. But…I also had 2 war flash fictions accepted for an anthology titled America’s Poetic Soul (to be published in 2012) and received an acceptance letter from Virginia Center for the Creative Arts for a 5-week fully funded residency. I phone-conferenced with the painter in Houston, TX about our intentions for THE WAREHOUSE SESSIONS this September and sent 3 more submissions to various lit mags and competitions.
All of which is to say that when the frames of this week’s “bowling game” came to a close and my colleagues emailed to say we were having a grill-out at The River House, it didn’t take much persuading for me to go along. The house is halfway between campus and town and owned by a writing mentor who has shaped my time here at Interlochen in more ways than one. I like to think of him as the Mr. Keating of Michigan, but when I tell him that he only laughs and says, “Nah. Just call me Vern.” Vern it is then, and I love every bit of the persona that comes along with the made-up name. 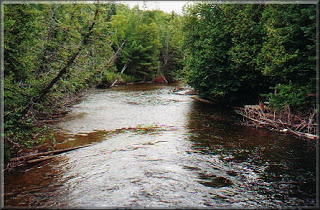 My place at The River House is often the role of contemplative participant. I’m right there with the conversations, here and there in the kitchen, cozying up around the fire–all of it–but I’m not often saying much out loud. I like to watch the way the light falls across the deep, brown, Boardman River. The way the mosquitoes hum and dive with their trademark pestering. The way people’s cigarette butts sizzle in the bottoms of empties. The way people instinctively hold their hands and feet up to the fire even when nobody’s feeling cold. And after this weekend’s festivities, I now know I like a little nightswimming, too.
Vern led us through the thick underbrush along a footpath he knows by heart. Among the late-night crew of stragglers, I was the only one besides Vern with shoes on. I left mine on out of sheer habit–two foot surgeries and broken bones will do that to you–but otherwise, I, too, might have gone barefoot like my fellow nightswimmers who, unfortunately, hobbled along slowly in pain. When we reached the river, the first few steps of thick, black mud were a welcome cooling. The river wrapped around our bodies like silk, and for all our silliness and calls out into the night, there was something magical about the excursion, too.
Maybe it was the way the trees opened up, framing the Big Dipper perfectly. Or the way Vern showed us a spot on an underwater log downstream that he found by heart (in complete darkness, mind you), tracing his fingers up the water-slicked trunk. “Here,” he said. “It’s right here.” And we felt it too–a hook for tying tubes or rafts to the tree to set Vern up perfectly for hours of carefree floating in place. After our first midnight float downstream and to The River House dock, most called it quits but Vern and 1 pal and I went back for more. And just like the empathetic and wise Mr. Keating in Dead Poet’s Society, out there in the water Vern seemed to know exactly the kind of week I’d had.
“Katey,” he said, wrapping a big palm around my shoulders. “Katey, you’re gonna make it. It’s going to happen.”
“I hope so,” I said, sounding a bit like an emphatic line from a Walt Whitman poem.
“You don’t have to hope. It’s going to happen.”
And with that we went under, and down, and back up again into the space where the night was the river and the river was the night and all of it, really, seemed like one fantastic world holding us up to the light of the stars.
Comments