Breaking Down at Borders Bookstore

And so we find ourselves here, Borders Bookstore, at 9:30pm on a Friday night in Traverse City, Michigan. It all feels a little post-apocalyptic what with larger-than-life discount signs teetering from the ceilings, half-empty bookshelves with misfiled titles, Christmas items haphazardly tossed into bargain bins alongside aluminum water bottles, Moleskin notebooks, and calendars for 2012.
It’s fitting to make this final pilgrimage while living in Michigan. The first Borders was started more than 40 years ago in Ann Arbor, after all, and touted as a college-friendly, independent, quirky shop where everybody knows your name. At the time, nobody knew Borders would grow into over 650 stores nationwide and employ tens of thousands of people. Nobody knew they’d be the ones to invent the bookstore superstore. And nobody knew that same innovation would ultimately contribute to their demise, as newer superstores like Barnes & Noble and Amazon mirrored everything Borders did right…then did it better, bigger, and faster.
As a writer, it feels as if I should have something to say about all of this–the 16,000 employees who were laid off in the last 5 years; the 19,000 who’ll be laid off in the coming months; the $41.4 million dollars Borders owes to Penguin Putnam (not to mention the other large publishing houses); the invention of e-readers; the downfall of great literature; the corporate business model; the Great Recession. But you can see how quickly it all spirals into politics and greenbacks and high-tech finger-pointing. 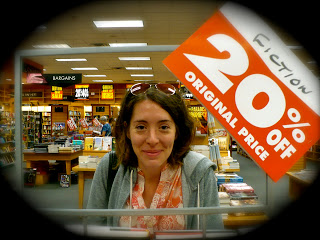 The truth is, I have no “stance.” Whether Borders Bookstore is open or closed, whether they’re dirt cheap or filthy rich, I still aspire to publish a book of my own someday and see it for sale in any bookstore that will take it. And the truth is, emerging writers like myself and my shopping pal shown at right–a fresh MFA in Fiction graduate, mind you–are still going to build our careers around words.
I suppose if I had to say one thing it would be to remind everyone to keep buying books and supporting literary magazines. Being a writer and not buying books or subscribing to mags is like being a farmer and not eating produce. Simply put: it’s self-defeating. Rudely put: it’s complacent and delusional. Gently put: it’s lazy. If you’re reading on a Kindle or you’re reading a used book or you’re reading a hand-me-down back issue, I don’t care. Just keep reading, keep things in circulation, and always, always give books or subscriptions as gifts for any occasion. Pay it forward, right? Right.
Given the chance to shop for big-name titles at low-low prices, what did I walk away with? Thanks to my father’s library, I could pass up the collected works of writers like T.C. Boyle, Ernest Hemingway, Shakespeare, John McPhee, John Steinbeck, Wendell Berry, and John Irving (to name a few). No need to double-up. But I did score Patti Smith’s memoir Just Kids, Junot Diaz’s Brief Wondrous Life of Oscar Wao, essays on the west by Ivan Doig, and a few high-glossy mags all for under $50.
Showing 2 comments