0
1
I’m antsy and THE CLAW looks at me with a road-lust twinkle in her headlights, so I take her for a spin to the Volvo dealership. They’ve got something I want and it’s been a long time coming. THE CLAW is ready to enter Volvo’s official High Mileage Club and I want the sticker to prove she’s in the 200,000-299,999 range (the tiers go up to 1,000,000).
“Can I help you?” a slick, white-haired man asks me when I enter the Volvo showroom.
“Yes, Sir,” I say, explaining about the High Mileage Club.
He pauses for a moment, then chooses his words carefully. “I’m going to give you two cards,” he says, handing first one, then the other across his desk. “This is for the Volvo Headquarters website, and I think you’ll find what you’re looking for there. We don’t have the stickers on hand, but you can apply online.”
“Okay,” I say, a little let down.
“The other one is my card. The average life of a Volvo station wagon is 287,000 miles,” he says, raising his eyebrows. “How many does yours have?” 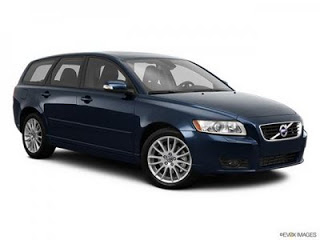 “215,000,” I say. “But I intend to take her to 400.”
“Somehow, I believe you when you say that,” he smiles, then fans his gaze across the glistening, smooth 2011 models. “With all due respect, I’ve only been working Volvos for six years, but I’ve learned enough to know that when a Volvo owner walks through those doors, I have to be ready.”
“Sir?”
“Volvo owners are the most eccentric subculture of car owners I’ve ever seen. They know their stuff. They have questions. They have opinions. ” He pauses again, swivels in his desk chair. “Take the curves, for instance. We got a lot of complains about the curves.”
I smile. “Oh, that,” I say. “Yeah, I’ve talked to some people who are upset about the rounded edges of the newer models. I’m not one to fuss about it, but I won’t complain that I’ve got the vintage style on mine.” We both look out at THE CLAW, admiring her sharp lines and boxy frame. “Did you say 287,000 miles? For all models?” I ask, looking nervously at THE CLAW. I hope she hasn’t overheard.
“That’s right,” the dealer says. “That’s the average.”
“Well,” I say, “I’m not worried.” But as soon as I say it, a tiny screw works its way into my brain and starts tallying the trips I know I have ahead of me, doing the math, estimating the time we have left together…Intentionally or not, the dealer has just given my car her death sentence. I refuse to accept it.
I thank him for his time and head back across the parking lot. Outside, the Michigan sun shines brightly, a cool breeze hints at fall. I savor the feeling, knowing I’ll be extending my summer by six weeks when I drive 1500 miles toward the Gulf of Mexico later this week. I can just see us now, my boxy blue Volvo, my UV-safe sunglasses, my two hands gripping the wheel. Who’s to say we’ll stop when we get to Houston? Who’s to say we won’t just keep going as the miles hit that 999 again and again, rolling through to another thousand. Who’s to say THE CLAW won’t go on forever? Who’s to say?
Comments