0
3
The New York Times couldn’t have said it any better than their 2007
article title “It’s Lonesome in This Old Town, Until You Go Underground.” At
first I thought it was just me—self-employed, on my own schedule, driving down
the main drags of the 4th largest city in the country…and hardly a
pedestrian in sight. They’re all in air
conditioned offices, I thought to myself, or working late. I was partially right. But even during lunch hour,
Houston appeared eerily empty.
Today I learned that’s
because 85,000 Houstonians are underground
on any given business day, walking in the city’s air-conditioned tunnels
that cover over 7 miles and connect 77 different buildings. Need a sandwich?
Sushi? A shoeshine? How about a chiropractic adjustment or your annual cleaning
at the dentist’s office? All of this and more can be found underground. And in
this summer’s heat wave, tunnel businesses have flourished, outselling
street-level shops and restaurants week after week.

[Some sections are more
like narrow hallways. Most of the tunnels are wide with businesses on both
sides. Other sections are under construction.]
As Howard and I navigated
along the North Louisiana Tunnel, parts of the Main Tunnel Loop, and the North
Travis Tunnel, we were struck by how thoroughly disorienting the experience
felt. The layout isn’t logical, the markers are based on buildings above ground
that you can’t see while below ground, and one tunnel looks effectively the
same as the next. The main reason for this is due to the fact that the tunnels
are privately owned and operated by the building owners above ground who
construct, insure, lease out, and provide security for their private sections.
This map makes it look easy, but the truth is that corporations above ground
hire people to orient new employees to the tunnel system—proof Howard and I aren’t
the only ones confused down there. 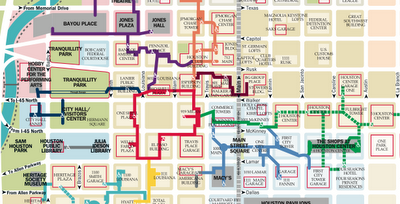 According
to the Times: “Ms. Lord, a writer and
Houston historian, traced the origins of the tunnels to Ross Sterling, an
oilman and governor during the Depression, who, inspired by Rockefeller Center,
linked two of his downtown buildings underground in the early 1930s. Soon
after, an entertainment entrepreneur, Will Horwitz, connected three of his
vaudeville and movie theaters to save on air-conditioning. And the tunnels grew
from there, despite the private expense of digging connections. The oil bust of
the 1980s forced many building owners to compete for business with amenities
like tunnels.”
It took
me over two weeks to discover the tunnels but there’s something I’ve known
about since I arrived that I also got to experience today. After patrolling the
underbelly of the city, it only seemed appropriate to make a pilgrimage to the
JP Morgan Chase Tower’s famous Sky Lobby on the 60th floor of
Houston’s 75-story skyscraper. How’d we get there, you might ask? We walked the
North Travis Tunnel, of course, then took the elevators all the way up into the
sky. 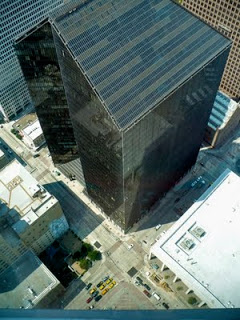 12 of 25 Ways of Looking at Houston: View looking down from the
Sky Lobby. Moments before, we were beneath the city where you see those yellow taxis waiting at the stoplight.

Today’s title prompt: “Permanent Wave.” (Howard
picked this time, bypassing the NY Times and opting for a phrase from a
previous blog post instead.)
Showing 3 comments