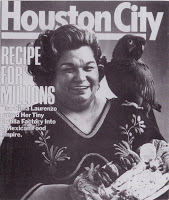 It’s still warm out at 9pm but we’re hungry on this Deiz y Seis (the Mexican Independence Day), so what better place to go than the original Ninfa’s restaurant on Navigation Boulevard? I’d heard of Ninfa’s even before crossing the state line, folks who’d visited Houston or formerly lived in Texas clutching my arm and leaning in to exclaim, “You’ve got to go, it’s as good as it gets.” My curiosity piqued, it doesn’t take much persuading and before I know it, Howard and his two delightful neighbors and I are sitting on the patio ordering a feast.
Here’s Mama Ninfa herself, appearing on the cover of Houston City Magazine in 1981, only the beginning of her long-reining status as both strong female and strong Hispanic icon in Texas. According to Thomas H. Kreneck, author of Del Pueblo, Ninfa moved from Harlingen to Houston with her husband in 1948 and opened Rio Grand Food Company. But by 1969 she was widowed and struggled to make ends meet for her children. Serving out of a small corner of the Food Company, Ninfa offered homemade chargrilled steak stuffed into flour tortillas–the dish that would eventually make her famous and lead to a national fajita craze. Many years of hard work followed, but soon enough Ninfa was named National Businesswoman of the Year by the US Hispanic Chamber of Commerce and today the local chain reigns supreme with dozens of locations thriving across the state. There’s even been an original musical play based on Ninfa’s life! (Here’s a video about the restaurant, if you’ve got a few minutes.)
I opted for chicken tamales and had enough leftovers for brunch the next day. But when I asked my dinner companions if this was Mexican food or Tex-Mex, they answered universally: Tex-Mex. Tex-Mex is Americanized Mexican food, if you want an easy definition. But not far from the Mexican border, and sitting at the original Ninfa’s, somehow that definition didn’t sit right with me. A little research turned up this quote from Eating in America: “Tex-Mex food might be described as native foreign food, contradictory through that term may
seem, It is native, for it does not exist elsewhere; it was born on this soil. But it is foreign in that
its inspiration came from an alien cuisine; that it has never merged into the mainstream of
American cooking and remains alive almost solely in the region where it originated…” 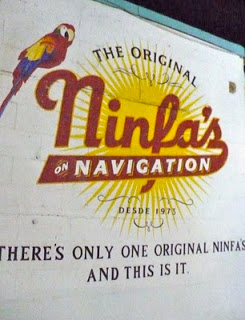 13 of 25 ways of Looking at Houston: Here’s the original Ninfa’s as photographed on the 2011 celebration of Mexican Independence day, Diez y Seis. I think this is about as Houston as I can get!