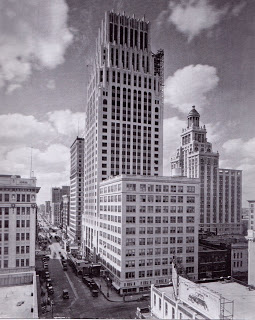 What can I say other than
the fact that I felt almost moved to tears? Picture wide-eyed-me scuffing along
the sidewalk of the fourth largest city in the country. I can’t stop staring at
the skyscrapers, the sheer impossibility of them. I hear the pigeons, the
gackles, the occasional crow. One voice walks by: “Two by fo’,” he says, “I
needed two by fo’s.” At the crosswalk, another voice: “And everybody thinks
she’s like, so confident and strong and all that, and I’m like yeah, but…” More
sounds: sirens, delivery trucks backing up, buses exhaling, car horns. All of
it blurs into cacophony inside my mind. The black people smile back at me here.
The white people don’t (unless we’re at a gallery opening). I keep walking,
eyes to the sky, the rest of me only partially focused.
Then I see it: the
historic Gulf Building, tucked humbly between buildings now two, three times
its height. Completed in 1929, this building remained the tallest in Houston
until 1963. Today it is one of the few dozen historic structures still standing
within city limits and thanks to organizations like Greater Houston Preservation Alliance, its importance is duly noted. Houston grew so quickly and impatiently that many of its
first buildings were razed.
Inside, it’s a completely
different world. As with most buildings I’ve entered in Houston, my first few
steps feel like entering into a portal—the physical contrast between outdoors
and indoors is so drastic, this is the only way my mind can make sense of it.
But after my eyes adjust and my skin cools, I almost lose my breath at the
sight of the Gulf Building’s ornate interior. 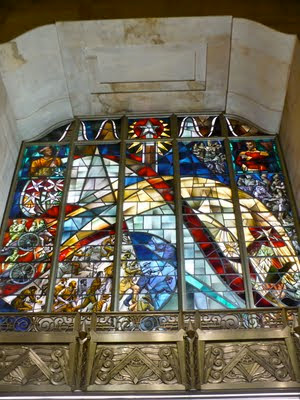 At one entrance, frescoes
depict scenes from Texas history. At the other, a story-high stained glass
window does the same. Notice Sam Houston (?) in the upper right corner, the Battle
of San Jacinto in the lower left, the star iconography throughout. I settle into
a leather seat in the main hall, which is three-stories high with a gold-leafed
ceiling, Indiana limestone walls, terrazzo floors, and Benedict nickel
detailing.

I sit long enough to lose
track of time. Two Chase Bank employees approach me on separate occasions as I
sit, asking if I need assistance. I show them the pamphlet I’m holding on the
history of the building and they nod, understanding why I’m there. Around me,
businessmen and women carry out their day. Their voices lift into the main
hall. I imagine their concerns sifting upwards, all the way to the 37th
floor, out the top windows and high, high into the sky.
7 of 25 Ways of Looking at Houston: Would that I
were a window washer all the live-long day! 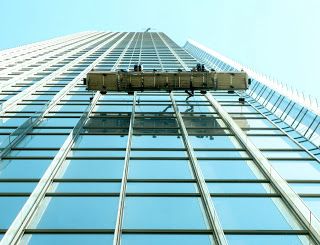