0
0
Ladies and Gentlemen, there’s something you should know about. Many decades ago a rare and almost forgotten creature made its brief debut in Texas history: the cattalo. That’s right–part longhorn cow part buffalo bull, this homely animal was first “created” by none other than Charles “Buffalo” Jones himself. Leave it to a cattle baron and leave it Texas to conjure something like this up. 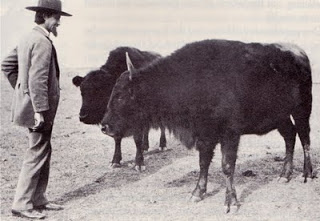 As historian William H. Forbis explains: “It should have been the perfect animal to produce profits on the range–beefier than a longhorn, stronger than an ox, hardy and independent. Its tough, woolly hide could be tanned into fine shoe leather or stretched to make luxuriant fur coats. This marvelous beast grew fat on the scrubbiest grass and lasted out the harshest of winters and most searing dry spells…It was called the cattalo, and it promised to be a kind of bovine Santa Claus, giving everything and asking nothing in return.”
Never mind that cowboys, never quick to complain, declared the cattalo as a “cross” animal. Never mind that authors in more than one source describe it as “spectacularly ugly.” Never mind that cattalo couldn’t reproduce as an independent species, that most births resulted in a dead calf (calffalo?) or dead mother. Charles Jones, pictured at left with his prized beauties and a handful of other barons felt determined to breed what, in the late 1880’s, must have felt like the next best thing. 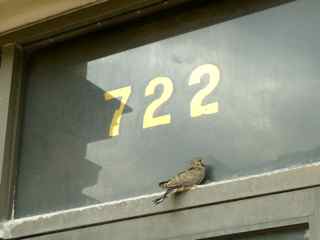 6 of 25 Ways of Looking at Houston: The grackle is the robin of downtown Houston, by which I mean these fellows are everywhere. Nothing special to most Houstonites, but they’re a new bird for my life list (along with the domesticated muscovy ducks along Buffalo Bayou) and I can’t seem to sit anywhere outside without getting as close as 1 foot away from a handful of them. Like most of us, these birds are also desperately seeking shade anywhere they can find it. This juvenile perches on Main Street, skyscrapers all around.
Yesterday and today’s NY Times title prompts: “Working
it Out” and “I’m with You.”