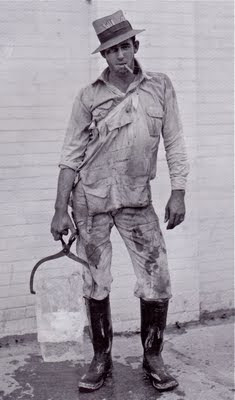 At first I questioned
myself: Shortness of breath? Extreme fatigue by 8 o’ clock a night?
My first four days in
Houston, I walked no more than fifty feet outdoors at a time, the air hitting
me like stones in the face. I’d hustle from the studio door into Howard’s
air-conditioned truck, or from a parking lot into the grocery store, the
gallery, the YMCA. Everywhere we went, it felt like a battle against the air,
the sun, the very molecules surrounding every inch of my body. No daily walks,
no nighttime strolls, no nada. Just me, THE WAREHOUSE SESSIONS, and the
inimitable forces of heat pulsing on the other side of every doorway or window.
[“This iceman worked for
the Home Ice Company in 1928 [in Houston]. He is holding a 25-pound chip off a
100-pound block. Once the delivery trucks were loaded, a properly attired
iceman would handle domestic delivery.” (page 38, Houston in the 1920s and 1930s)]
One afternoon, I tried
driving to the public library. It’s a five-minute drive in THE CLAW from our
studio to the main branch and I literally clutched at my chest as I cruised
down San Jacinto Street. The air felt like a clamp pressing my lungs into
submission, as though ten small children were jumping on my chest in
ring-around-the-rosy. By the time I’d gotten through the main doors, I could
hardly think. The stories-high, glass-walled building felt like a portal or
spaceship necessary for survival. If I stayed on the cool side of the glass, I’d
make it. If I ventured into the overheated, apocalyptic, urban jungle, I’d
promptly seethe on the sidewalks, body lurching like a live wire until my
inevitable death.
By Saturday, I could hide
no more. The temperature dropped to a “balmy” 96 degrees and winds from the
growing tropical storms in the Gulf provided a façade of comfort persuasive
enough to beckon a walk. I grabbed dirty shorts and a t-shirt from my hamper,
slapped on sunscreen and sunglasses, and trudged along the city sidewalks as
Howard played tour guide. Every greenway and park had browning grasses, dried
up crepe myrtles, birds thirsting in shallow, unclean puddles. A public
fountain in Discovery Park that usually runs continuously, flowed only in short
bursts as children danced in the cool water, then toppled to the brick flooring
as they waited for the next spout of water to emerge.
The exhaustion has stopped
as my body has adjusted and I continue to drink 3 liters of water a day. “It’s
a frozen tundra out there,” Howard announced this morning after stepping outside.
It was 9:30 a.m. and already 83 degrees. I rolled my eyes, reached for my water
bottle, and turned up the AC.
3 of 25 Ways of Looking at Houston: I took these
photos separately, then cropped and manipulated them for this juxtaposition.
Houston is, if anything, THIRSTY.

Today’s prompt from the NY Times titles: “Despite
the Facts.”