[Buffalo Bayou, Houston, TX]
According to Buffalo Bayou Partnership, this 52-mile waterway “is the nation’s number
one port in foreign cargo and one of the largest ports in the world,” running through the heart of downtown Houston. Here in THE WAREHOUSE SESSIONS, where Howard and I live out our (25) artisan days in a warehouse under Interstate 10, Buffalo Bayou is less than 100 yards away and a welcome sign of the natural world amidst this bustling, heat-stroked city.
But readers of this blog know I can’t mention the natural world without pulling out my trusty copy of Home Ground: Language for an American Landscape (edited by Barry Lopez). According to author Robert Morgan, who provides the listing for bayou in this cultural ecology book:
Bayou is a word that sounds French but is in fact of Choctaw origin, deriving from hayuk, meaning “small stream.” In recorded usage since 1818, bayou most commonly refers to marshy offshoots and overflowings of lakes and rivers in the delta of Louisiana and the Gulf area. In a region of mostly swamps and marshy prairies, the bayous are spaces of open water, sluggish or stagnant, often the abandoned channels of the river delta cut off into oxbow lakes in the river’s variorum history of trial and evolution. Bayou can also refer to a secondary channel, away from the main stream, where the current is slower and the volume smaller. Sometimes a tributary is referred to as a bayou, as is any sluggish stream. The word can be said to refer to any slow water in a marshy area, if not dead water perhaps sleeping water, or dreaming water. 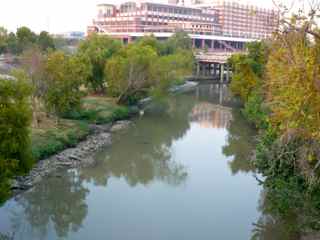 [The tall building in the background is part of the UH-Dowtown campus. We’re just on the other side of that building, underneath the overpasses.] 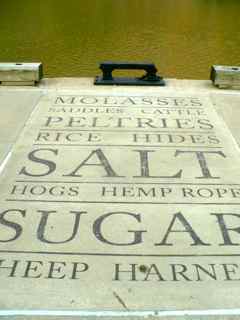 By 1914, much of Buffalo Bayou had been dredged to 25-feet deep, allowing ocean-going vessels to successfully deliver goods to downtown Houston. We’re an hour by freeway from the Gulf of Mexico, yet for nearly a century ships have been delivering to Houston as though it sits right on the beach. The determination of humankind and the progress of society never cease to amaze me. And thanks to a woman named Terry Hershey and then-Congressman George H.W. Bush, the 1960’s movement to line Buffalo Bayou with pavement was stopped, making possible today’s lush views like the one shown above.
4 of 25 Ways of Looking at Houston: Texas has stars everywhere you look and the city of Houston is no exception. I snapped these pics on a short stroll downtown and soon thereafter started noticing stars everywhere downtown. Some shown here include the Astros logo, the Houston Chronicle logo, and stars lining the gateway to the city.