Birds by Day, Bucks by Night 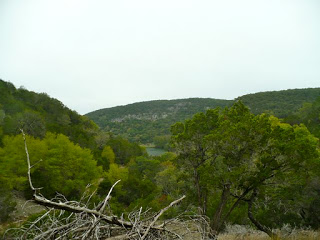 The past several days have been a-buzz with activity at Madrono Ranch and I’ve appreciated this for the balance it provides to my fiction-writing process. This morning, the ranch owners took Margie (a new resident here!) and I on a two-hour birding hike around the lake and up one of the canyons. I woke early for my yoga and coffee, got a couple hundred words in, then hit the trails with them for views like this.
It’s good to get perspective–and that’s a metaphor, for the way I’ve been thinking about my new story as well. Here’s a shortlist of the birds we saw: Say’s phoebe, belted kingfisher, canyon wren, golden-fronted woodpecker, titmouse, pied-billed grebe, hairy woodpecker, kinglet, Tenessee warbler, Wilson’s warbler, Bewick’s wren, Western scrub jay, and a blue-winged (or green?) teal. That plus bass leaping in the lake and a waddling porcupine in the shrubs. Quite a morning!
Two weeks ago, I had to stop every 300 words and take a break to think about my character in the short story. I kicked stones in the driveway. I stared at birds. I looked at the clouds. All the while mulling my character over in my mind to really consider what kind of person he might be. Now, 17 pages into the story, I’ve been able to write about 1000 words in one sitting the past two mornings. It’s not bulk that I’m after (I’m using those numbers by way of convenient measurment, nothing more), but richness. It’s a good sign that I can write about my character for longer now, and perhaps an even better sign that I’m still surprising myself on the page. It’s still slower than my normal “pace” but the quality is different. And in the end, quality wins. 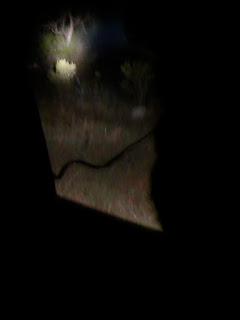 I was rewarded doubly today when R announced he’d be counting deer that night using a gigantic, remote-controlled spotlight mounted on the top of his truck. This light runs off the vehicle’s battery and can illuminate up to 700 feet away. With two of his kids in tow (one with a clipboard, the other with an additional handheld spotlight), we bumped along the old roads to see what we could see. Not much, of course–it was quite dark. But enough to get a sense for a lower number of bucks and higher number of does. “There should be five deer per acre once you add it all up and figure it out,” R told me. But it’s still a guessing game, he admitted. Because the roads only go high and low on these hills and not between. Furthermore, they don’t provide access to all 1500 acres. Conducted three times a year over the span of three nights, these informal surveys do provide something, though. This year, the verdict is in: it’ll be time to hunt does, not bucks. The drought has taken its toll. There’s still a sufficient population to hunt, but as R says, “We gotta keep the breeders.”
Cowboy Fact of the Day: A favorite past time of many-a-cowboy was a sporting event called “pulling the chicken.” It started with a rooster buried neck-deep in the ground. As reported by a Texas newspaper of the day, “…the young men and boys dash by, one after another, and as they pass the rooster each man swings himself down from the saddle and reaches for its head.” You can guess what it took to make a winner…
Comments