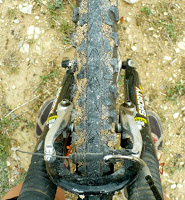 It’s been cooler the past several days, which means I can hop on my mountain bike before dusk and get an hour’s ride in before the world turns grainy and gray. I’m struggling with depth perception when I ride here, and I finally realized it’s because of the limestone roads and pathways. It’s difficult to distinguish between white, light gray, and anemic brown–and for most of my ride, that’s what I’m on. I’m easily distracted when I ride, scaring up packs of wild boar and countless deer. Mostly, I enjoy the feeling of movement and power when I’m on my bike, but here where the heat and drought still feel deadly, occasionally my mind turns sour.
I’d be lying if I said I don’t scan the trees and fence lines for a quick “way out” should a boar decide to turn on me or if I’ve judged the fields wrong and the buffies are actually in the one I’m hurtling across. Not that I’d stand a chance. I like to think I’d pedal hard, then at the last minute leap from my seat and turn to face the enraged creature, positioning my mountain bike between my body and any array of tusks/horns/teeth. I blame things like this for such distorted day-mares, but just as quickly as the thought arises it fades away.
One thing that struck me about tonight’s ride was the sharp, single-syllable hiss that white-tailed deer emit when they’re startled. I probably scared up over fifty deer without even trying and that sound always precipitated their mad, illogical dashes through the cedar and mesquite. At one point, nearly twenty of them loped through the forest parallel to the road, some staying alongside me for half a mile. R (the ranch manager) is right–some deer are just plain stupid–and they run straight until they’re scared breathless rather than cutting right and ducking over a hill.
At the end of a particularly deer-laden stretch, the forest cleared into a pasture with mature trees. The timing seemed so perfect it’s almost hard to write, but as the does and yearlings darted through the field, one majestic buck turned to me and held his head very still in a single beam of light. I got off my bike, approached another ten feet, then snapped a photo. Everything about this should have gone wrong–the sunlight was ferociously bright, backlighting the buck with an almost blinding quality. My camera’s zoom lens is broken and the edges of the frame are usually darkened. (Dear PowerBall: Please can I win you so that I may a) purchase a new digital camera and, b) maybe buy a house some day.) But for once these failings enhanced the image. Here was the reward: 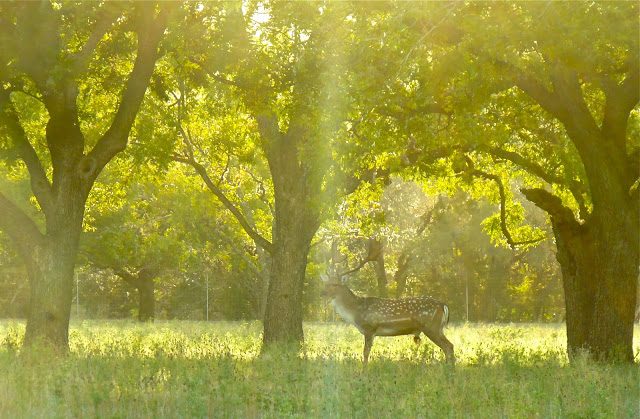 With the buck holding court, the pasture really did seem that illumined, the creature more like some patient messenger from another time, and those healthy-looking trees some kind of blessing in this landscape where every inch looks parched.

Cowboy Fact of the Day: An experienced cowboy with an easy hand on the reigns could ride as many as 70 miles in a single day. An impatient one, however, might wear out his horse in just one mile.